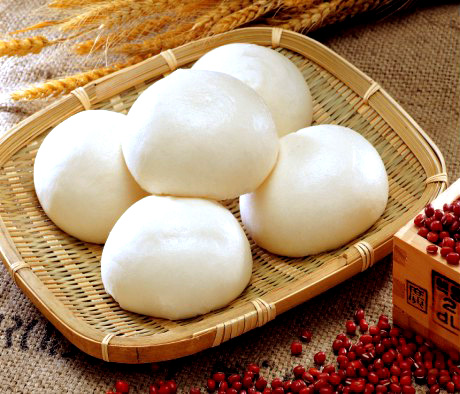 Towards the end of the year, when the temperature begins to drop, all Koreans instinctively crave a certain snack.

Jjinbbang was first introduced 340 years ago, in the first cookbook ever to be written in Hangeul.

Derived from Chinese dumplings, jjinbbang evolved and developed itself to become one of Korea's favorite winter snacks.

Jjinbbang is made by stuffing flour dough with red bean paste and other ingredients, then steaming the buns.

In the colder months, everyone in Korea, young and old, are clamoring for jjinbbang.

A jjinbbang fresh out of the steamer is all you need to take care of your hunger and cold.

[Interview : ] "It's very hearty. I feel full after eating one of these".

There is a region in Korea that played a particularly instrumental role in making the jjinbbang famous.

The village is two hours away from Seoul. It even took its name from its specialty product, and is called the Anheung Jjinbbang Village.

[Interview : Eom Cheol-ho, Customer] "We were passing by, and we decided to get some famous Anheung jjinbbang".

[Interview : Lim In-sun, Customer] "I think the kids will like it because of the sweet red bean paste inside".

This is a factory in Anheung that produces jjinbbang. Technology has enabled producers to mass produce the buns rather than making them individually by hand, and now they are being sold to stores overseas as well as in Korea.

[Interview : Lee Seon-jong, Owner of an Anheung Jjinbbang brand] "Jjinbbang has become popular with foreigners abroad in addition to Koreans living overseas. We export to six or seven countries including the United States, Canada, Australia, and Germany. Our goal is to popularize Korea's traditional Anheung jjinbbang all over the world".

Jjinbbang gained its popularity by offering a taste of tradition. However, another snack, the bungeobbang[붕어빵], is making a comeback by fusing the traditional with the modern.

[Interview : Kim Seo-hwan, Employee of a fusion bungeobbang store] "We thought, 'Does bungeobbang have to be made with red beans

Bungeobbang are popular among Koreans who want something to keep them warm in winter. Red bean filling is placed on batter that is poured into frames shaped like fish.

Bungeobbang was first imported from Japan in the 1930s, but it evolved into a Korean-style snack.

Recently, fusion bungeobbang of every size and flavor are becoming the new trend.

Their convenience and nutrition even make them a suitable substitute for a meal.

[Interview : Jeon Yong-seon, Customer] "The idea is really great. They use regular sandwich bread to make bungeobbang and let you choose the stuffing. It's interesting and delicious".

[Interview : Justine van den Watt, Tourist Australia] "Yeah, it's good. Very good. Good as a snack for lunch, maybe, if you were out and you were busy. As a quick snack, yeah".

Of course, Koreans enjoy European-style bread as well, but these days, the most popular items in bakeries are nutritious, Korean-style creations that are made with ingredients like nuts, sweet potato, squash, and glutinous rice.

[Interview : Ahn Chang-hyeon, Korean Master Baker No. 7] "The history of bread began in Europe, but these days Korean-style bread is becoming more popular".

Bread made with naturally fermented makgeolli is not only good for the health, but also delicious and fragrant. The wine is now in demand in bakeries everywhere.

Some types of bread now use rice powder instead of flour.

This shift was made with Koreans' natural inclination for rice in mind. In addition, many kinds of fillings for bread are now being made with traditionally Korean ingredients like chestnuts, pumpkin, sweet potato, garlic and bulgogi. This makes the bread truly Korean.

[Interview : Yu Gyeong-ok, Customer] "The first bite is soft, and melts in your mouth. Then, the more you chew, the more savory it gets".

[Interview : Jeong Sun-deok, Customer] "Right now, I understand that most of the ingredients for bread are imported from Europe. I think that it will be more meaningful if bread were made with grain grown here in Korea. I hope that there will be more types of traditional Korean bread developed in the future".

Korea has revitalized the bread market with traditional jjinbang, and fusion bungeobbang.

We are all awaiting the day when the entire world will find itself enjoying the nutritious and delicious bread of Korea.

Many of the breads you'll find here have that delicate soft texture that sort of melts in your mouth.
Absolutely delicious.
And the move towards rice bread is truly remarkable.
I didn't think it could be done but it tastes like good bread.
It's great with hot chocolate.

"Korea's Traditional Bread"
by HanCinema is licensed under a Creative Commons Attribution-Share Alike 3.0 Unported License.
Based on a work from this source