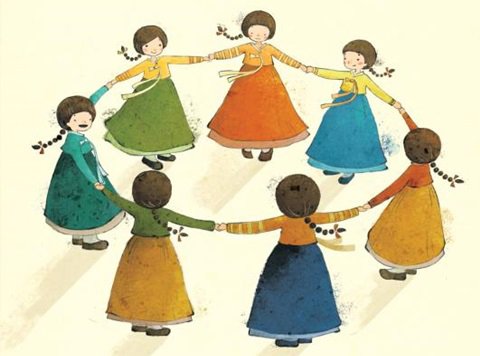 The evening of Chuseok or Korean Thanksgiving is the brightest night of the year, and women traditionally performed a group dance called Ganggangsullae.

They gathered and formed a large circle, holding hands and whirling and singing.

This tradition is especially strong in southwestern Korea and it was passed down through generations in the coastal parts of Jeolla Provinces.

There are many interesting stories about Ganggangsullae. It is said that Admiral Yi Sun-shin, who repelled a Japanese invasion in the 16th century, mobilized women disguised as men to dance Ganggangsullae to make the Korean military force look bigger than it was.

Ganggangsullae was listed as a UNESCO Intangible Cultural Heritage of Humanity in 2009. Until recently there was an annual competition in Haenam, South Jeolla Province, to promote the tradition.

The order of the dance is as follows. First, form a large circle in the shape of the full moon and whirl slowly, singing the song slowly. One person leads a chant, and the rest responds. The pace becomes steadily faster.

This group activity is a lot of fun and is a great way to exercise with families, friends, and neighbors at Chuseok, rather than spending time alone with computer games.

"Korea's Whirling Harvest Moon Dance"
by HanCinema is licensed under a Creative Commons Attribution-Share Alike 3.0 Unported License.
Based on a work from this source