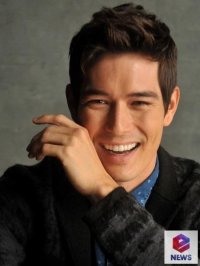 With his tall figure, handsome looks and easy smile, it seems Ricky Kim has what it takes to become a star. In person, however, he's down-to-earth, funny and, most of all, very serious about his career, lifelong goals and Korea.

The 28-year-old recently finished filming the popular television drama "Jejoongwon", and although his departure gave him time to relax, fans were disappointed to see him leave so early.

The role of Doctor Heron, one of the first missionaries in Korea who died at an early age, was indeed impressive, and even he thought it was one of the most memorable characters he has played since his debut. Not only were the medical terms new to him, but the language from the Joseon Kingdom (1392-1910) gave him a hard time.

After a hectic two weeks, he had to pay a visit to the hospital and this was when he finally realized that this work ethic was not helping either him or his character.

"I wasn't taking care of the things that were important in my life. So during the time in the hospital, I started rearranging what my priorities were. Why stress out? Enjoy it. I should enjoy this; this should be fun", said Lee.

Doctor Heron was eventually well received, by the characters within the drama and also by the fans.

Studying mass communication at Kansas State University, Lee practically had his life mapped out: go to law school, get a job, go to Capitol Hill and work as a lobbyist. But life took a different turn and he found himself in Korea, volunteering and teaching English on the side.

After leaving Korea to travel around the world, he realized that there were two ways to help people: become a lawyer and help people through law or become an actor and a household name, and help people through other opportunities. Four months later, Kim was back in Korea handing out his profile to agencies. Work didn't come at first, but he wasn't discouraged.

"If you do good things, keep smiling and if you are happy and enjoying what you are doing, work will come some day", he said.

And that was exactly what happened. He got a part in the drama "On Air", and fans started to notice the good-looking guy with the American accent.

Although grateful for the attention, this stereotype of foreign actors was actually what Kim was trying to break away from.

"All of the foreign actors are similar: the boy-next-door English teacher, always smiling and nice. The only color you have is that you are a nice guy", Kim said.

"But as an actor, I have passion and an image (I want to portray). I don't want to be an entertainer, but an actor. And not just any actor: I want to be known as a Korean-American actor. I want the Korean (to be included)".

While some newcomers in the entertainment business work diligently to promote themselves and expose their names as much as possible to the media, Kim said that that was the last thing on his mind. He wants only to be remembered for the characters he plays.

"When I act, I want my character to be known. I wanted people to know Doctor Heron", he said. And that was what happened with the drama "Jejoongwon".

At the beginning of the interview, Kim said he had a list of the 10 things he wanted to do before leaving for law school. Apparently, he has already finished the first list, which included traveling around the world, finishing the Rubik's Cube in less than two minutes and learning his mother's language ― Korean.

"Finishing the Rubik's Cube was the first thing I got done. I can do one in a minute and nine seconds", he said, smiling.

Now he's preparing for the next list, things he hopes to achieve soon. As much as he appreciated his American background, it was hard to not notice his love and admiration for his mother's country and its people throughout the interview.

"My new list includes me branching out to the United States. When they love my acting, they will see where I came from, and when they see that my roots are from Korea, then that lifts up Korea".

"Korean-American Actor Ricky Kim Follows His Heart"
by HanCinema is licensed under a Creative Commons Attribution-Share Alike 3.0 Unported License.
Based on a work from this source