Korean-American Actress Won't Be Pinned Down 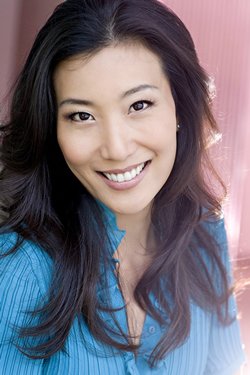 Korean-American actress Esther Chae has built up her filmography with roles in popular soap operas such as "The West Wing" and "The Shield", while continuing to write scripts, act and direct plays.

In her latest work, a one-person play called "So the Arrow Flies", Chae plays four roles to portray a cat-and-mouse game between a North Korean spy and an FBI agent who is in hot pursuit. The play has received much critical acclaim and was invited to a number of international events, including the Edinburgh Festival Fringe.

"Writing isn't that difficult for me", said Chae. "There is a limit to what you can do as an actor, as you have to follow the script, but in writing there are no limits to what your imagination can conjure up".

Chae was born in Oregon, while her parents were studying there, and her family moved to Korea when she was five. After graduating from Korea University, she returned to the U.S. with a long-held dream of becoming an actress. She then graduated from the Yale School of Drama before making her stage debut.

Chae soon became convinced that she had found her true calling in life, but there were very few roles available to Asian women in western plays at the time. As she felt dejected by the dearth of opportunities, her friends advised her to go to the Hollywood.

"I didn't think I'd stay in Los Angeles for long. It was more like, 'Let's see what it's like'. But I started getting auditions for soap operas there, despite my doubts about whether I could make it, then I got offered a number of roles, followed by some commercials and indie films, which expanded the scope of my career", she said.

She married a German-American journalist, a former writer for the New York Times, last year, and the couple now lives in Los Angeles. Chae said she plans to audition for some TV series while working on the film adaptation of "So the Arrow Flies". And of course, she will continue to push herself to the limit by acting, directing, and writing.

"Korean-American Actress Won't Be Pinned Down"
by HanCinema is licensed under a Creative Commons Attribution-Share Alike 3.0 Unported License.
Based on a work from this source