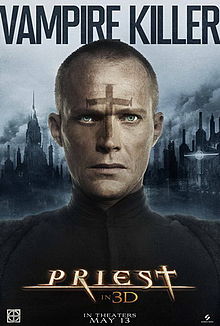 According to MTV's Splash Page: "For those unfamiliar with the series, "Priest" unfolds in a postapocalytpic world ravaged by a long war with vampires. "Legion" actor Paul Bettany plays a warrior priest who sets out to find a group of vampires who attacked his brother (played by "True Blood" actor Stephen Moyer) and kidnapped his niece. He's joined on the quest by a small-town sheriff ("Twilight" actor Cam Gigandet) who also happens to be the boyfriend of the kidnapped girl".

Here is the link to the MTV page with the Priest Preview and Blurb.

"Korean Animation: New Trailer for Manhwa-based Movie "Priest""
by HanCinema is licensed under a Creative Commons Attribution-Share Alike 3.0 Unported License.
Based on a work from this source