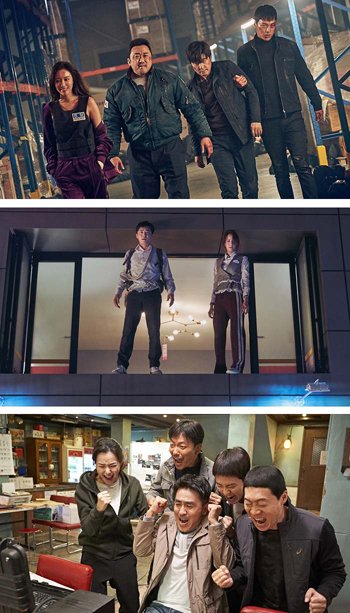 Korean cinema experienced no smash hit this summer as none of the new releases in the last few months surpassed the 10 million viewer mark.

Most films disappeared from theaters soon after opening, except for "Extreme Job" (January), "Parasite" (May) and "Exit - Movie" (July). According to the Korean Film Council, ticket sales for Korean films hit their lowest point in seven years last month. Monthly ticket sales for August had been over 20 million since 2013, but dropped to 18 million this year.

Although the total number of viewers from January to August increased from last year, Korean films failed to occupy even half of the box office except in January and February, when "Extreme Job" was playing.

Three calculated blockbusters were released during the Chuseok holiday, but as of Monday only "The Bad Guys: Reign of Chaos", starring Ma Dong-seok had passed its break-even point with 2.67 million spectators. But "Tazza: One Eyed Jack" and "Cheer Up, Mr. Lee" fell short of expectations.

Critics blame formulaic filmmaking and lack of quality. "It's all the same stars and the same supposedly failsafe elements, which can no longer attract moviegoers, who are getting more sophisticated" said film critic Yoon Sung-eun.

"Among the top 10 domestic films released in the first half of this year based on the number of screens, the majority were dramas such as "MAL-MO-E: The Secret Mission", "A Resistance" and "Parasite", and crime movies were the second most common", movie market analyst Kim Hyung-ho said.

Most of the films which were shown on more than 1,000 screens from 2005 to 2017 were drama, comedy, action, crime and thriller movies, with a handful of animations, documentaries, fantasies and sci-fi movies thrown in.

"It's a pity they still make movies in the way they did a couple of years ago while audiences these days expect more because platforms like Netflix are offering amazing new content every month", Yoon said.

The reason why Marvel movies like the "Avengers" series achieved such a huge success in Korea is not that they are any less formulaic but because at least the special effects are better than home-made fare.

Hollywood blockbusters such as "Aladdin" and "Toy Story 4" also dominated the local box office in June and July because they appeal shamelessly to kids. But Korean gangster films and political thrillers including "The Beast" and "Long Live the King" failed to appeal to their more mature target audience.

"People constantly want novelty. We need to pay attention to the success of low-budget movies such as "Gonjiam: Haunted Asylum", "Intimate Strangers" and "On Your Wedding Day", which have a bit of character", said Cho Sung-jin at multiplex chain CGV.