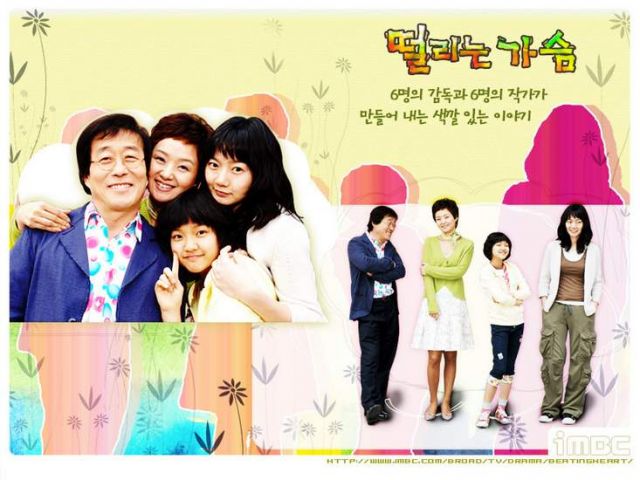 12 episodes - Sat, Sun 19:55
Synopsis
Do you remember the most exciting moment in your life that made your heart race?
Here is a story of a family. You will witness the six most exciting and crucial moments in their lives, which you can experience as well.
Created by six writers and six producers, this drama portrays the six different stories of a family. It shows how different points of view influence the characters, their behavior and the story itself. This drama has the characteristics of a reality show. It tells us that the life itself can be interpreted in various ways depending on from where you're looking at it.


Bae Doo-na (Acted by Bae Doona)
She's 29 years old. She's bright, honest and sometimes bold. She's somewhat clumsy. She's a passionate and kind person. She does her best at whatever she does, and that includes love. She met an art student and fell in love with him. She married him, but he left her in three months. He had just broken up with his girlfriend when Doo-na and he met. He chose to marry Doo-na in a fit of anger. Left heartbroken, she refuses to fall in love again. Her life was a big mess after he left her, but she pulled things together thanks to her family's loving care. At the moment, she's working at a record shop her friend is running. The office workers nearby take their lunch break in a square in front of the shop. She enjoys playing music for them. She meets someone. She can't dare to tell the man that she's been married, but he wants her to meet his parents.

Kang Seong-jae (Acted by Kim Dong-wan)
He's 29 years old. He works for a big company. He's a diligent and pleasant man. However, he has a conservative expectation about women. He happens to listen to a song he likes coming from the shop where Doo-na is working. He goes into the shop to ask about the song and gets to meet Doo-na. He wanders around the shop at lunchtime; she always plays his favorite music when she sees him. He falls in love with Doo-na. He has never met a woman who has made him want to get married. However, he's shocked to find out that she's been married. He believes that he loves her enough not to care about her past, but even a bigger problem is waiting for him.

Bae Jong-ok (Acted by Bae Jong-ok)
She's smart and sensitive. She has a lot more sense of reality and adaptability than her husband. She's a good wife and a mother, but she loves being a woman more than anything. She's usually very good at controlling her feelings, but sometimes she explodes. She married her husband because he's kind and somewhat naive, but in everyday life, she sometimes can't avoid being a nagging wife.

Kim Chang-wan (Acted by Kim Chang-wan)
He was known for his sensitivity. He was in a band at college and a finalist in the University song contest. However, he chose to live an ordinary life over a life of music. Now, he's very used to his repetitive and monotonous life. Nevertheless, deep down, he still has a boyish mind. He feels very uncomfortable around macho men.