Korean drama of the week "Drama Special - Do You Know Tae-Kwon-Do?" 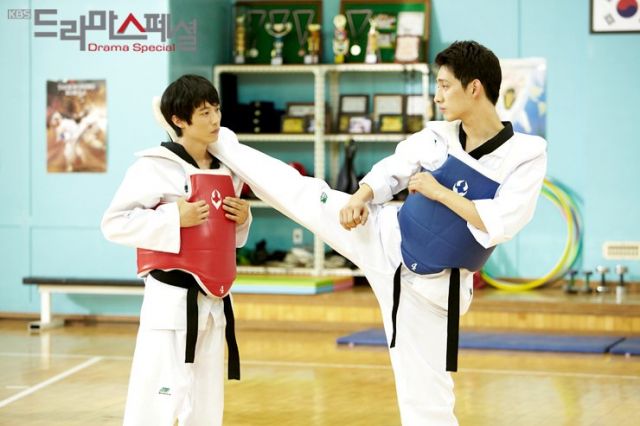 1 episode - Sun 23:45
12th part of the "Drama Special" series season 3
Synopsis
Do-hyeon majored in Physical Education in University and he dreams of becoming an action star but he's just been roaming around the edges of movies for several years. His long time lover Hyeon-jin also left him after telling him, "I'm afraid to age with you". Do-hyeon's life is so complicated in terms of work and love. Then an opportunity comes around! The position of an after school Tae-Kwon-Do master at his mother school.

Do-hyeon becomes a Tae-Kwon-Do teacher at his old school thanks to Im's screw up. Actually that position was for another 'Do-hyeon' who was a rising star in Tae-Kwon-Do and a friend from school. This is a risk and opportunity for Do-hyeon who didn't have the grades to complete a teaching course. Isn't there anything he can do with his brother's advise and a begginer's book to Tae-Kwon-Do? And there's only six students anyways. This was Do-hyeon's big misjudgement. Three out of six were troublemakers who the school gave up on and the other three don't even have the slightest talent in this sport. Do-hyeon is even snubbed by them and the future is dark. However, there is a way out. Do-hyeon's specialty is to 'be hit well'. He doesn't know how to throw a punch or a kick but he knows how to avoid a punch or even be hit less and controlling the pain. What changes will this 'talent' bring?