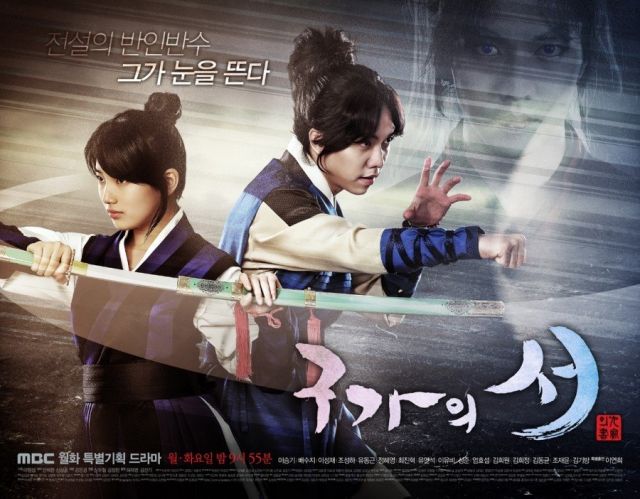 24 episodes - Mon, Tue 21:05
Also known as "Kang Chi, the Beginning"
Formerly known as "Medical Novel" on HanCinema
Synopsis
Born half-animal and half-human, Choi Kang-chi gets into all kinds of awkward and perilous situations in his personal mission to turn into a full human in this spectacular action-packed period drama! Despite not being a human, Choi Kang-chi tries to become a humanistic individual with a big heart in this wild adventure!

Starring
Choii Kang-chi (Actor Lee Seung-gi)
His father is Koo Weol-ryeong (), a guardian spirit of Mt. Jiri and his mother is Seo-hwa, making him a half-human and half-animal. Unbeknownst that he was born half-human and half-animal, he is abandoned by his mother who left him floating in a basket in a river. He is found by merchant Park Mu-sol who runs the Baeknyeongaekgwan. Kang-chi is impulsive, reactionary, and uses physical force before thinking twice. He starts life anew after encountering Dam Yeo-wul and Yi Sun-shin.

Dam Yeo-wul (Actress Suzy, member of MISS A)
She joins her father who was tasked with the job of investigating a series of murders by Yi Sun-shin. She crosses paths with Gang-chi who is falsely accused of committing murder. While Kang-chi always caused trouble, Yeo-wul discovers his innermost secret. This makes her feel sympathy for him. Even after knowing the truth that Kang-chi is half-human and half-animal, she trusts that he will not harm people and stands by his side. She is the only person who can calm down Kang-chi when he goes on a rampage.

Yi Sun-shin (Actor Yoo Dong-geun)
After being appointed as governor of Jeolla Province by Yoo Seong-ryong, he was the first official to detect the presence of Japanese spies in the Joseon kingdom. After learning that Won Gyun controls the royal palace and all the key royal administrations, he asks Dam Pyeong-jun, who oversaw a secret army of men, to spy on Japanese spies. One day, he encounters a strange boy called Kang-chi. Although Kang-chi appears to be a human, Yi Sun-shin discovers that there is another power that lies within him. So he puts Kang-chi under the charge of Dam Pyeong-jun, asking him to lead the boy towards a right path. Whenever Kang-chi is in a perilous situation, Lee Sun-shin will appear to show him a meaningful lesson to learn from the situation. He is Kang-chi's eternal mentor and hero.