Korean drama of the week "I Love You, Don't Cry" 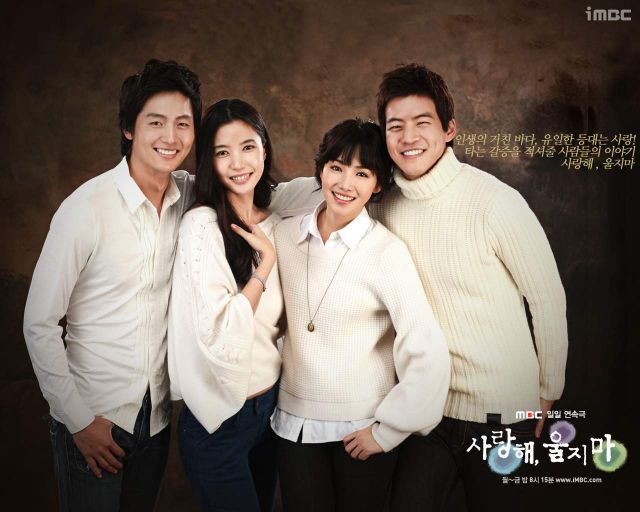 132 episodes - Mon~Fri 20:15
Also known as "Don't Cry My Love"
Synopsis
A heartwarming love story of a couple that has been deeply hurt in the past.
No matter who it is, everyone harbors hidden emotional pain.
Even the person who seems happiest on the outside may hold secret pain in his heart. "I Love You, Don't Cry" is a heartwarming drama bound to emotionally ease the pain of viewers.
"I Love You, Don't Cry" is a story about people who comfort others, and forgive one another through love.
This is a drama that guides viewers down the path of discovering true love.

Cho Mi-soo / actress Lee Yu-ri
As an upbeat, down-to-earth character, Cho Mi-soo refuses to conceal her looks behind heavy makeup or plastic surgery. With her warm and optimistic personality, she is easily approachable and loved by everyone.
The person she loves the most in this world is her mother.
To her, Hyeon-woo is someone who is right between being a boyfriend and just a friend.
Since Mi-soo grew up without a father, Hyeon-woo is the only guy that she has ever grown close to.

Han Yeong-min / actor Lee Jung-jin
A competent and successful young architect.
He is the future son-in-law of the president of a university where he teaches as a part-time professor. He is scheduled to become a full-time professor beginning from next semester. Although he appears cold and arrogant on the outside, he holds a painful secret within that nobody knows of.
And despite his arrogant looks, he has a warm heart.
After he was engaged to Seo-yeong, the daughter of the chairman of the university he works at, he was promised a position as a full-time professor. Nothing seemed to stop his success… But just when everything seemed picture-perfect, something shocking happened. When he was studying abroad, there was a girl who passionately pursued him. And after six whole years, she reappeared in his life with a young boy, claiming that he is the father of the boy. Through this unexpected chaos, Yeong-min suddenly becomes a single father, and his engagement with Seo-yeong becomes extremely shaky.

Min Seo-yeong / actress Oh Seung-hyun
As the daughter of the chairman of Sungwoon University, Seo-yeong is a part-time professor. She is extremely intelligent, beautiful, passionate and straight-forward.
Opposite from her gentle, refined side, she also has a selfish side within.
She deeply loves Yeong-min… almost more than he loves her.
While happily dreaming of a perfect marriage with Yeong-min, the sudden appearance of Yeong-min's son immediately hinders her rosy future. And her emotional side forces her to break her engagement off with him. She shows how love can sometimes lead to obsession.

Jang Hyeon-woo / actor Lee Sang-yoon
Hyeon-woo is a graduate school student who majors in architecture at Sungwoon University where Seo-yeong's father is the president.
With his good looks and easy-going personality, he is extremely popular among the girls. Although he may seem like the playboy type, he is actually very devoted to Mi-soo, and considers her as his best friend.
However, one day, he realizes that Mi-soo means more to him than just a friend.
He is shocked to find out that Mi-soo is falling for another man, and to make matters worse, he discovers that that man is none other than Han Yeong-min, one of his professors. Hyeon-woo painfully watches as Mi-soo falls deeper and deeper in love with Yeong-min. Although viewing this is painful, he stays by her side as her friend, since he cherishes her.