Korean drama of the week "Missing You" 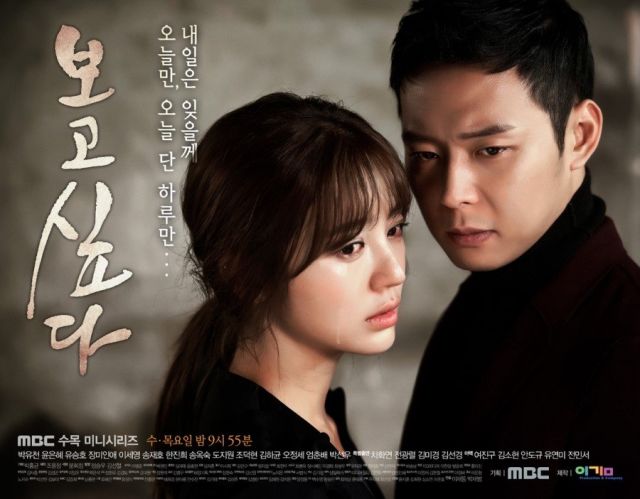 21 episodes - Wed, Thu 21:55
Synopsis
A story of romance involving a long-lost sweetheart who causes heartache and infinite sadness. There is no way for them to be together even for a fleeting moment. A story of how four young adults come to the realization that their feelings of longing are actually feelings of love.

Han Jung-woo (Actor: Park Yoo-chun)
He had a crush on Soo-yeon who was known around the neighborhood as the daughter of a murderer. Although he promised to be her friend, he was unable to keep that promise due to circumstances beyond his control. He blames himself for hurting Soo-yeon's feelings in an unimaginable way so he does not believe he has any right to show emotion over it to get over his guilt. He makes an effort to remember Soo-yeon's voice over the years. After undergoing such an emotional period in his life, the young once-frightened boy becomes a homicide detective who searches for Soo-yeon. His nickname is "Crazy rabbit".

Lee Soo-yeon (Actress: Yoon Eun-hye)
A fashion designer who goes by the name Zoe. She went out with Jung-woo when she was 15 because he wanted to be her friend. Soo-yeon fell in love with Jung-woo too. But their separation resulted in her selfless act to protect Jung-woo. Her boyfriend Hyung-jooon treats her well and provides her with the solace she needs to forget her past. But for some reason she cannot get Jung-woo out of her mind.

Kang Hyung-joon (Actor: Yoo Seung-ho)
He runs a money management firm. He has an angelic face but without any angel wings. Due to a childhood injury from a dog bite, he uses a cane to walk. He is skilled at reading people. He never loses his temper or gets excited, nor does he ever laugh heartily over anything. He has a way of silently waiting for a person to finally give him the answer that he seeks. But he acts differently around Zoe (Soo-yeon). That is, until Zoe is reunited with Han Jung-woo for the first time in 14 years.

Kim Eun-joo (Actress: Jang Mi-inae)
She has no ambition in life and never accomplished much academically or career-wise. She's satisfied with her plain and simple life. She works as a webtoon artist but any income she makes goes to buying liquor to fuel her creative juices. She likes to poke her nose in other people's business and is very generous with her time. But her crush on Jung-woo, who unfortunately, for her is infatuated with Soo-yeon, consumes most of her time.

Added episode 1 for the Korean drama "Missing You"