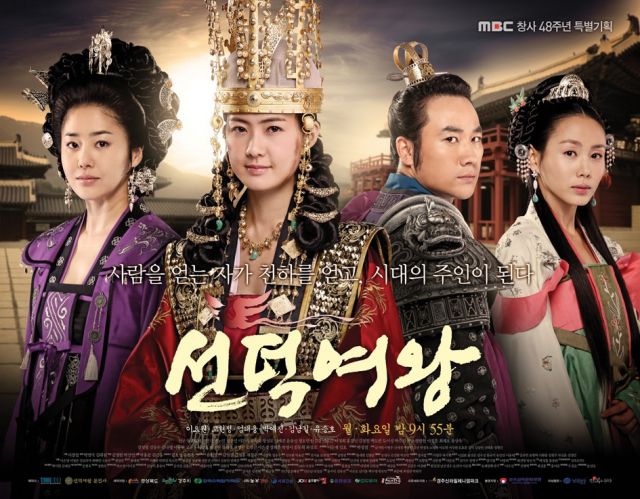 62 episodes - Mon, Tue 21:55
Synopsis
The story of a beautiful queen, who has to give up her love to save the people. With historical battle scenes and a star-studded cast, Queen Seondeok of Silla is the follow-up historical drama to MBC's "Yi San" and "Jumong" for 2009!
Writer Kim Yeong-hyeon of the famous "Dae Jang Geum" will be the main writer of this new TV mini-series.

A biopic of Queen Seondeok, who was born a princess and later became the ruler of Silla, leaving behind many brilliant achievements.

During the Three Kingdoms period of Korea...
Deokman (Queen Seondeok's childhood name) was born a twin but was abandoned as a baby. She was later brought back to the Silla palace, where she joined forces with her twin sister Princess Chonmyong to oppose Mi-shil, who wanted to seize power. Mi-shil devised sinister plans to have the two Silla princesses exiled from the kingdom, and in a secretive battle, Princess Chonmyong was assassinated by Mi-shil. But Princess Deokman shrewdly enlisted the help of General Kim Yusin and eliminated her archenemy Mi-shil. She became the first female ruler of the Silla kingdom.

Starring
Princess Deokman / Queen Seondeok (actress Lee Yo-won)
"The queen is my destiny"
After surviving many crises in her life, she finally became the ruler of Silla. Her loyal followers included General Kim Yusin and Kim Chunchu. She became the first female ruler in Korea's history and laid the foundation for the unification of the three kingdoms under Silla.

She was born as the twin sister of Princess Chonmyong and had a close brush with death as a baby due to the attempted assassination by Mi-shil, who had ambitions for the throne. A loyal servant named So-hwa rescued her by fleeing the kingdom with her. She was raised outside of the kingdom and when she turned 15, she learned that she was a Silla princess. So she returned to Silla to meet her parents.

Mi-shil (actress Go Hyun-jung)
Archenemy of Queen Seondeok. As a beautiful seductress, she held sway over kings and the elite Hwarang corps. Her duty was to promote the children of the noble class to high positions, but instead she used her beauty to seduce King Jinheung and King Jinpyeong to wield enormous power. But Princess Chonmyong and Princess Deokman opposed her and stopped her from becoming the ruler.

Kim Yusin (actor Uhm Tae-woong)
A great Silla general. With a handsome face and outstanding battle skills, he became the leader of the elite Hwarang corps. With a grand vision of unifying the three kingdoms under Silla's rule, he aligns himself with Princess Deokman who puts her complete trust in him. Princess Deokman later fell in love with Kim Yusin but they were unable to be together due to a twist of fate.

**Hwarang: Hwarang were elite Silla warriors who also received training in the arts and music.

Princess Cheonmyeong (actress Park Ye-jin)
She was born as Princess Deokman's twin sister but only she was chosen to live in the palace as a princess. She grew up with everything she could desire. Due to Mi-shil's influence, she lived quietly in the palace, but she possessed charisma and intelligence. After learning that she had a twin sister, she and Princess Deokman were reunited. While trying to reinstate her sister as a princess, she was assassinated by Mi-shil.

Bidam (actor Kim Nam-gil)
Although he was the son of Mi-shil, he helped Princess Deokman become the ruler. When he saw that Princess Deokman trusted Kim Yusin more than him, he became jealous and led a revolt against Kim Yusin. .