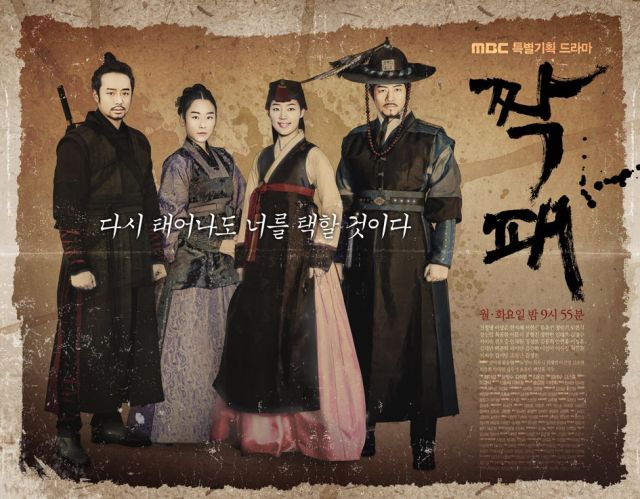 32 episodes - Mon, Tue 21:55
Synopsis
Making a breakaway from the "royal family centered" drama, it portrays the lives and the love of the outcasts or the neglected class in the late Joseon Period whose life stories have often been neglected in dramas before. Slaves, beggars, leather shoe makers, thieves, street bums and butchers were those people who were very poor yet good in heart.

Cheon-Doong (16 years old,26 years old) – Chun Jung-myung
He was born into a wealthy noble family but lives his life as a beggar and later becomes a heroic outlaw like Robin Hood.

Gwi-Dong (16 years old,26 years old) – Lee Sang-yoon
He was born as the son of a beggar but lives Cheon-Doong's life as a nobleman and later becomes a police chief.

Dong-Nyeo (16 years old,26 years old) – Han Ji-hye
She is leading lady of this drama. She's the daughter of a village school teacher(Seong Cho-Si). She is learned and clever.


Dal-i (15 years old, 25 years old) – Seo Hyun-jin
Ever since she was a kid, she has always loved Gwi-Dong who was from a different and most importantly an upper class