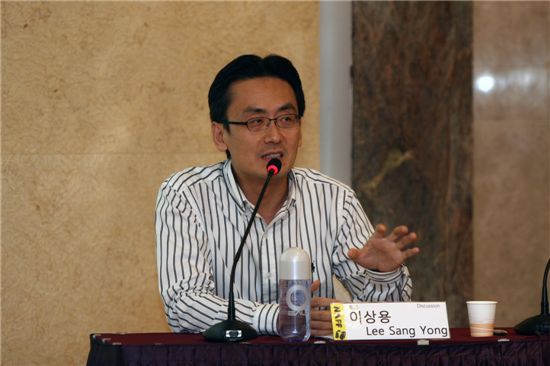 Lee Sang-yong-I, Senior Vice President of the Film Production Planning Team at CJ Entertainment, speaks at a forum on "Solution for the Improvement of Korean Film Industry - In Matters of Investment and Distribution" held at Koryo Hotel in the city of Bucheon in Gyeonggi Province, South Korea on July 21, 2010, during the ongoing Puchon International Fantastic Film Festival. [PiFan]

The Korean film industry is increasingly recognizing the need for big screen productions to be targeted toward the global audience as a way of helping the currently struggling industry revive and keep alive the "Hallyu", or Korean Wave.

At a forum titled "Solution for the Improvement of Korean Film Industry - In Matters of Investment and Distribution", part of the industry specialized program Network of Asian Fantastic Films (NAFF) of the ongoing Puchon International Fantastic Film Festival (PiFan), numerous Korean film producers and investors gathered to discuss on the current state of the domestic film industry and ways to bring developments.

A panelist, True Blue Pictures CEO Stanley Kim, remarked that the Korean film industry is overly dependent on famous directors, hindering producers from playing their role. "There is a need for producers to cultivate the ability to develop original projects, as well as there being a need to establish various models of investment and revenue distribution", Kim emphasized.

Kim also said, "Expanding overseas through co-productions is without question the way for Korean films in the small domestic market to go but there is a need for a more definite target audience to be set for such productions".

Lee Sang-yong-I, Senior Vice President of the Film Production Planning Team at CJ Entertainment asserted that the local film market must ultimately target the global market to overcome its crisis of being saturated and seeing low profits from investments.

He took CJ's 2009 summer blockbuster "Haeundae" as an example. "Even though Korea, Japan and China are in the same cultural sphere, it's so difficult to create a content which can be tied into a single category. Hence, because each country has high barriers such as language to overcome, a cultural breakthrough needs to occur through each person's outstanding creativity and efforts to form a film market which can play a leading role", he explained.

Another panelist, DCG Plus' Film Investment Division Director Shin Hye-yeon spoke of a new strategy the Hallyu could take on, citing her experience of co-producing film "A Brand New Life" with France.

"I think it's almost impossible to create content which works for both countries when it comes to international co-productions because the difference in language and culture feel so big", Shin commented. "Rather than exporting a Korean film, I think it'll be more realistic to produce a film for your overseas target audience or to sell creative ideas and talent".

Choi, who had been seeking a way to advance into the Chinese film market, has adopted the strategy of producing a movie aimed at the Chinese audience rather than exporting a Korean production. He had sought for a partner to create a movie with him by reaching out to Chinese producers and directors by setting up an office in Beijing.

When asked how he came to create a commercial genre film with Zhang Ming who has mainly created art films in the past, Choi responded, "There has been a rising tendency of former art film directors such as Zia Zhang-ke participating in commercial films". 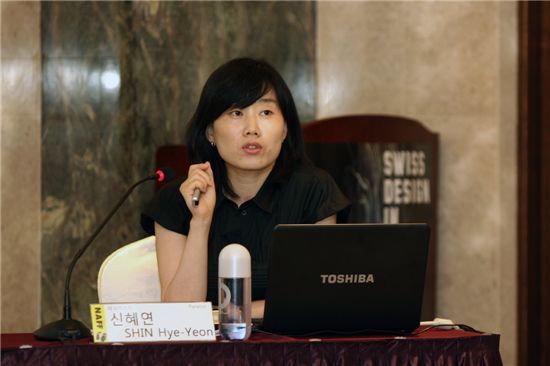 DCG Plus' Film Investment Division Director Shin Hye-yeon speaks at a forum on "Solution for the Improvement of Korean Film Industry - In Matters of Investment and Distribution" held at Koryo Hotel in the city of Bucheon in Gyeonggi Province, South Korea on July 21, 2010, during the ongoing Puchon International Fantastic Film Festival. [PiFan]