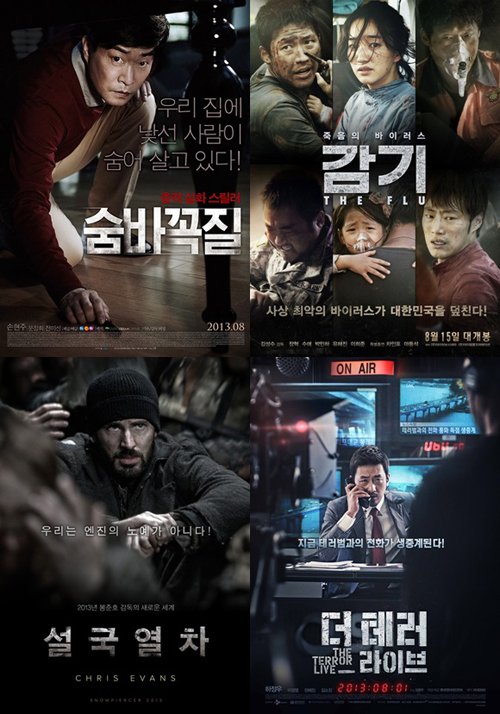 Korean films are having the upper hand at local theaters this summer and crowding out their Hollywood rivals.

Kim Jee-woon's "Hide and Seek" and Kim Seong-su's "The Flu", which were released two weeks later, have so far garnered box-office admissions of 2.61 million and 2.09 million.

Owing to a wave of domestic hits, the market share of Korean films reached 89.1 percent last weekend. The local film industry is now said to be enjoying a boom due to a variety of films helmed by both well-known and rookie directors.

As of Wednesday, Korean films have attracted a total of 81.72 million spectators this year, putting them well on track to pass the 100-million mark for the second year after the milestone was first reached in 2012. Some critics even optimistically predict the figure will extend as far as 200 million viewers, as a spate of films with heavyweight names are awaiting release in the second half of this year.

"The Spy", starring Daniel Henney, Moon So-ri and Sol Kyung-gu is due out on Sept. 5. "The Face Reader", which boasts a star-studded cast including Kim Hye-soo, Lee Jung-jae and Song Kang-ho, "The Huntresses", a Korean version of the American action comedy Charlie's Angels starring Son Ga-in, Ha Ji-won and Kang Ye-won, and "Friends 2", a sequel to the 2001 record-breaking film by Kwak Gyeong-taek, will all follow suit.

"Korean Flicks Dominate Domestic Box Office This Summer"
by HanCinema is licensed under a Creative Commons Attribution-Share Alike 3.0 Unported License.
Based on a work from this source