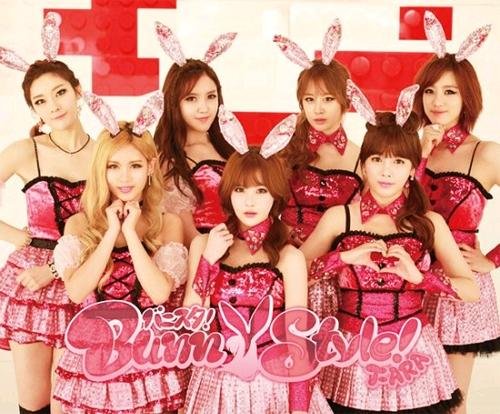 Girl band T-ara have been performing in Japan since unveiling their latest album "Bunny Style" last month. The album has reached the No. 2 spot in Japan's Oricon weekly charts, and the girls have made a splash with their risqué dance routine.

One widely watched video clip on the Internet shows Japanese women laughing while T-ara perform their routine at an outdoor concert in Japan. The video has incensed some Korean patriots, who feel the manufactured combo are letting the side down.

T-ara are not alone in presenting a more risqué image in Japan than at home. Girls' Generation, who appeal to fans in Korea with their innocent image, went on stage in Japan wearing tight shorts and performed a pole dance in costumes that looked like lingerie.

Seven-member girl band Rainbow were banned from appearing on Korean TV in 2010 over a dance routine that involved lifting up their shirts to expose their navels, but in 2011 they performed the exact same dance routine in Japan.

"Japanese TV is more tolerant in terms of sexual content, and Japanese talent agencies also want that kind of image", said a staffer with Rainbow's agency in Korea. "But we don't only try to highlight a sexy image".

Industry watchers say manufactured bands are being sexed up to sell them in new markets. "Girl bands need to capture the attention of fans in a foreign market so it is essential to bare more skin", said Kim Won, an expert in Korean entertainment and culture. "But a sexy concept has its limitations and singers must show a unique talent to stay competitive".

"Korean Girl Bands Bare More Skin in Japan"
by HanCinema is licensed under a Creative Commons Attribution-Share Alike 3.0 Unported License.
Based on a work from this source