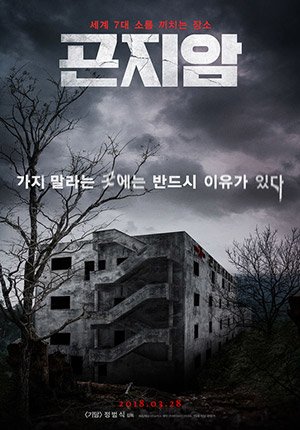 The horror film "Gonjiam: Haunted Asylum", directed by Jeong Beom-sik, has been invited to the Far East Film Festival in Udine, Italy.

The film revolves around seven people who gather to experience true horror at the now-abandoned Gonjiam Psychiatric Hospital in Gwangju, Gyeonggi Province, which was selected as one of the seven "freakiest" places in the world by CNN.

The film festival, which runs from April 20-28, is one of the most prestigious in Europe dedicated to Asian movies. It has introduced new Asian directors and films to the world since 1999.

Its performance is considered an auspicious sign for the Korean horror film genre, which has been in the doldrums since its brief heyday in the late 1990s and early 2000s. All the top-earning films in the genre came from that period.

At the top of the list is "A Tale of Two Sisters" in 2003, which drew 3.15 million viewers, followed by "The Phone" in 2002 with 2.2 million. The "Whispering Corridors" series started in 1998 and was quite successful, with the first instalment drawing 2 million viewers and the third, released in 2003, drawing 1.78 million.

But Korean horror later began to disenchant moviegoers due to the films' recycled plots, losing ground to Japanese horror films and, more recently, Hollywood ones.

"Korean Horror Movie Invited to Far East Film Festival in Italy"
by HanCinema is licensed under a Creative Commons Attribution-Share Alike 3.0 Unported License.
Based on a work from this source