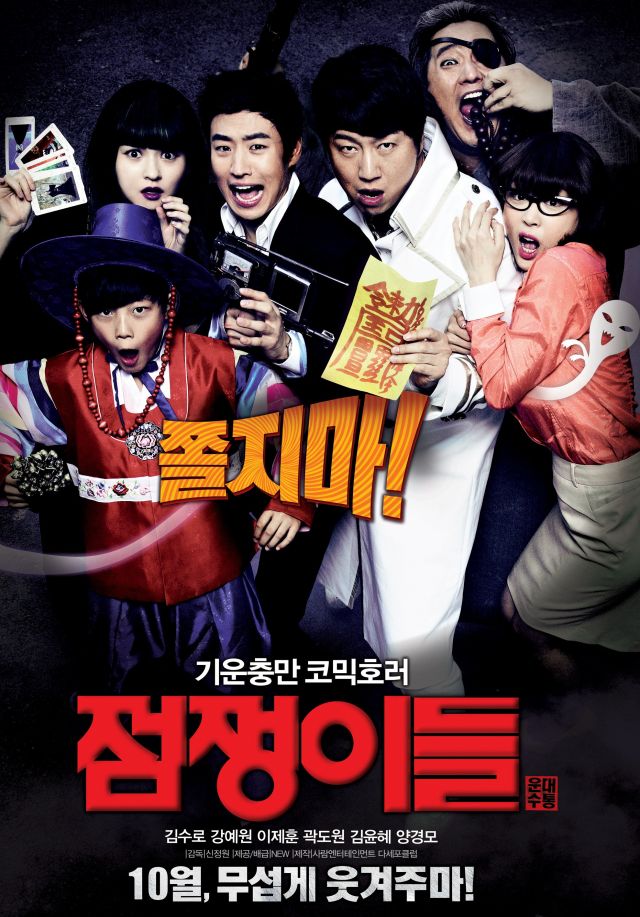 Previously known as "The Fortune Tellers" on HanCinema
Synopsis
Chan-young (Kang Ye-won), a young journalist, is sent to investigate a village which has supposedly been possessed by demons. The incidents taking place have been so strange and terrifying that local shamans and other religious leaders have simply given up, abandoning the town. But upon her arrival, Chan-young discovers that an all-star team of supernaturally-inclined heroes has assembled to rid the village of evil. This team includes Mr. PARK the exorcist (Kim Soo-ro), Shi-min the monk, Wol-gwang the clairvoyant, Seung-hee the tarot master, and Seok-hyeon, an engineer (Lee Je-hoon). Chan-young follows the heroes as they prepare for an epic battle against the village's evil forces.
Director Sin Jeong-won is known as a master of the comedic horror or black comedy film. Aside from making a number of festival appearances, his first two features -- "To Catch a Virgin Ghost" (2004) and "Chaw" (2008) -- each took in well over a million admissions at the domestic box office. "Ghost Sweepers" will be his third feature.

Review
Will superhero flicks be possible in Korea? "Ghost Sweepers" is the Korean version of Hollywood's superhero movies. Setting of this fantasy story is a village possessed by demons. Mysterious accidents continue and 5 fortune tellers from across the country come together to perform an exorcism and keep out the evil spirit; Mr. PARK the exorcist, Shimin the monk, Wol-gwang the boy who can see the future, Seung-hee the tarot master, and Seok-hyeon an engineer. Like in the American TV show "Heroes", they get together for an incident and showcase their abilities. This is Sin Jeong-won's third movie after ghost tale "To Catch a Virgin Ghost", and black comedy "Chaw". He intends to create an atmosphere of horror through creativity and style instead of relying on massive budget. In addition to being a black comedy, which Sin Jeong-won is well-known for, the film will also have the element of adventure, a la "Indiana Jones" series.