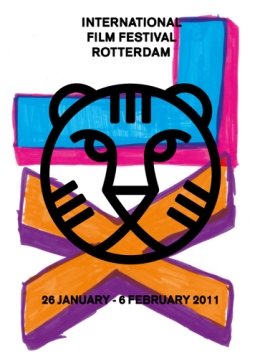 Rotterdam's Bright Future section, featuring "first or second films by filmmakers from whom the festival expects a lot in the future" is comprised of 80 titles selected from 38 countries this year. World premieres include the Korean films "Characters" (Son Kwang-Ju) and "Anyang, Paradise City" (Park Chan-kyong). As described on the IFFR website, "Korean visual artist Park Chan-kyong (brother of Park Chan-week) has created a fascinating film essay, with fictional elements, about the Korean city Anyang. His countrywoman Son Kwang-Ju's moving debut film is a psychological drama dealing with the creative process of moviemaking".

The selection of the Tiger Awards Competition 2011 includes two movies from Korea as well. "Bleak Night", the first feature film by Yoon Sung-hyun, "focuses on the subdued aggression and explosive relationships among friends in Korea's often repressive school system". The other, "The Journals of Musan" is the first feature film of Park Jung-bum, who also plays the lead. It is described as a portrait of the "plights and emotions of a North Korean defector who is trying to adapt to South Korea's capitalist society". These two titles shared the top prizes in the New Currents competition at the Pusan International Film Festival last October, and "The Journals of Musan" went on to capture the Golden Star Grand Prize at the Marrakech International Film Festival in early December where the jury was chaired by John Malkovich.

The IFFR's Spectrum, which consists of "topical, powerful and innovative works from all corners of the world, from veterans to less well-known directors" is highlighting Lee Chang-dong's "Poetry", which won the Best Screenplay Award at Cannes 2010. The program reads: "Legendary actress Yoon Jung-hee delivers a phenomenal performance as the grandma raising her grandson in a sleepy little town. Blind to the cruelty of reality, she takes a poetry class".