Korean presence being felt in Ulaanbaatar 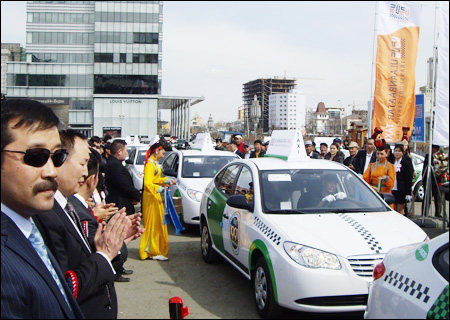 Hyundai Motor launches the"Avante" taxi in Ulaanbaatar, Mongolia, in April this year. While Japanese cars dominate the market in the capital, the number of Korean automobiles is slowly growing. / Korea Times file

By the same token, Ulaanbaatar, the capital of Mongolia, astonishes many by the surprising visibility of Korean goods.

In a grocery store located inside the State Department Store, packs of seaweed-wrapped round sushi are for sale. A plastic label on the shelf says "gimbap", rice rolled in laver. Gimbap is also found in a bakery nearby, this time, unsliced, and they sell out at an alarming pace.

Packs of thin, tubes of premixed powered coffee, cream and sugar, canned drinks, snacks and seasonings from Korea find their places on the shelves.

One Korean, who's been living in Ulaanbaatar for 11 years with a Mongolian spouse, said premixed coffee is popular. It's relatively expensive, therefore, he always buys it on his way back to Mongolia from Korea.

Karaoke bars, popular in Korea as "noraebang" (singing room) are also a big hit. Karaoke signs decorate every other street corner in the city,
Inside, the machines imported from Korea have a mixture of old Korean and contemporary K-pop songs, along with Mongolian and Russian choices.

What's surprisingly common is to hear the younger generation speak one or two words of Korean, confirming a Mongolian diplomat based in Seoul, who once said the popularity of Korean language has grown.

Although not so welcomed by the government due to its religious affiliation, Korean Christians have also founded three universities in the capital.

Korean Ambassador to Mongolia Chung Il said all these things made his life easier, having relatively easy access to ministers and other prominent figures in the Mongolian government.

One possible explanation is the large number of Mongolians that come to Korea.

The Korea Immigration Office estimated that approximately 12,000 Mongolians were working in Korea as of the end of last year. The number of Mongolian students and spouses is also growing.

Economic development in the mining country has begun to pick up, as proved by a number of high-rise buildings under construction. However, wealth is held by only a few mining businessmen, pushing under-privileged workers to leave the country to make money.

One Mongolian who had worked in Korea for five years said he returned home and bought a new house and a new car in Ulaanbaatar.

Ancient contact between Mongolia and Korea could further explain these links.

Records of Mongolian-Korean contact date back to the 13th century.

In modern times, substantial contact began in 1990 when the post-communist Mongolia and Republic of Korean agreed to initiate bilateral diplomatic relations, opening up doors for trade, investment and human exchanges.

Exchanges at a government level have increased in particular, the most recent of which was the visit of Prime Minister Sukhbaataryn Batbold to Korea in March. President Lee Myung-bak is also scheduled to visit Mongolia later this year.

However, the Korean resident said the situation is not the same outside the capital, where a Chinese presence is most dominant.

"Korean presence being felt in Ulaanbaatar"
by HanCinema is licensed under a Creative Commons Attribution-Share Alike 3.0 Unported License.
Based on a work from this source