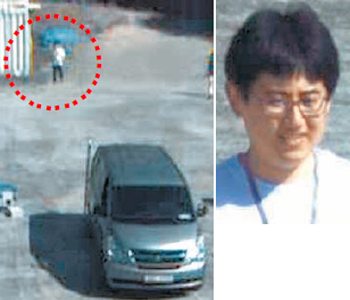 Korean researchers have developed the worlds first high-resolution CCTV system, which clearly shows people`s faces recorded at the distance of 60m. The system, which was disclosed on Tuesday by Security Recognition Technology Research Laboratory at Korea Research Institute of Standards and Science (KRISS), interworks with three cameras to monitor an area, which is 64 times larger at maximum than the area covered by existing surveillance system. As the cameras are able to record 30 peoples faces per minute, the new CCTV system is expected to provide great assistance when chasing a criminal suspect or performing crime prevention activities.

The existing security CCTV is not equipped with zoom-in function. Recorded faces can be recognized only when the faces were captured within 7.2 meter distance in radius due to the low resolution. Still, CCTVs with that resolution (7.2-meter distance level) account for only 30 percent of the entire surveillance videos installed across the nation. The maximum distance which allows users to recognize recorded faces is only 2.7 meters for 70 percent of CCTVs in Korea.

This system consists of three cameras and a computer to process and transmit recorded data. Installation cost per one unit (100 million won, or approx. USD 89,700) is higher than the existing system (30 million won per unit, or approx. USD 26,910). But the new CCTV system does not require to have a data processing system in the master control room. As the new system covers wide areas, it is not necessary to install CCTVs every seven or eight meters, which makes the overall installation cost lower than that of existing CCTVs.