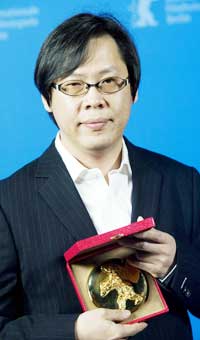 Director Park Chan-kyong poses with his Golden Bear award of the International Short Film Jury for his film "Night Fishing", co-directed by Park Chan-wook, during the awards ceremony at the 61st Berlinale International Film Festival in Berlin, Feb. 19.
/ Reuters-Yonhap

Shot entirely on an iPhone, the film competed with 26 other shorts. Park and his artist brother co-directed the fantasy flick starring singer-turned-actress Lee Jung-hyun and actor Oh Kwang-rok. "Paranmanjang" is about a man who goes fishing at night and meets a female shaman. The film portrays images of shamanistic rituals and depicts the transition between life and death. 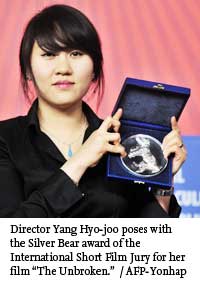 Meanwhile, rising director Yang Hyo-joo received the Silver Bear award of the International Short Film Jury for her film "Broken Night". The film is about a story about two swindlers who are involved in a real accident one evening after contriving a fake car accident to claim insurance payments.

Yang graduated from the Korea National University of Arts this year and "Broken Night" was her graduation project. She has won numerous awards for her earlier shorts films "One Last Day" and "Jouissance". Most recently she received the Asian New Force award at the 15th Hong Kong Independent Short Film and Video Awards.

This year, nine Korean movies were shown in various sections of the festival.

"Korean shorts win awards"
by HanCinema is licensed under a Creative Commons Attribution-Share Alike 3.0 Unported License.
Based on a work from this source