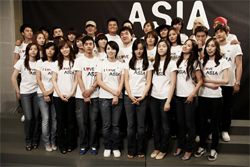 Some 30 popular celebrities, including singers, actors, comedians and sports stars, sang together at a studio in Samseongdong, Seoul on May 29.

The 30 stars, all dressed in a white T-shirt with the slogan 'I Love Asia', took part in a project jointly put together by Jackie Chan and J.Y. Park to help the victims of the earthquake victims in China. Renowned film director Kang Je-gyu, the executive producer of the video shoot, was not able to attend due to personal matters overseas.

The project was organized to help the quake victims as well as to express hope that Asia will unite to help all those in need in times of crisis.

The song will be distributed around Asia via the Internet, DVD and music video. The song will also be performed in front of a live Chinese audience.