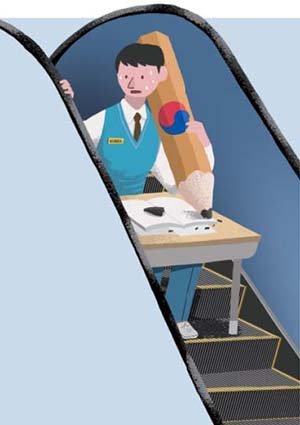 PISA is conducted every three years, and the latest involved 710,000 15-year-olds in 79 countries.

In 2018, their rankings fell further to sixth to 11th in reading, fifth to ninth in math and sixth to 10th in science.

Chinese youngsters now sweep the top rankings followed by students in Singapore and Macau. The PISA report said Korea was among seven countries whose average ranking fell in all areas.

At the same time, Korean schoolkids remained among the unhappiest in the world. On a scale of 10 (perfectly satisfied with quality of life) to 0 (not satisfied at all), Korean students scored 6.52, up slightly compared to the previous 6.36 but still way below the OECD average of 7.04 points.

Students in Brunei, Hong Kong, Japan, Macau, Turkey and the U.K. were even more unhappy.