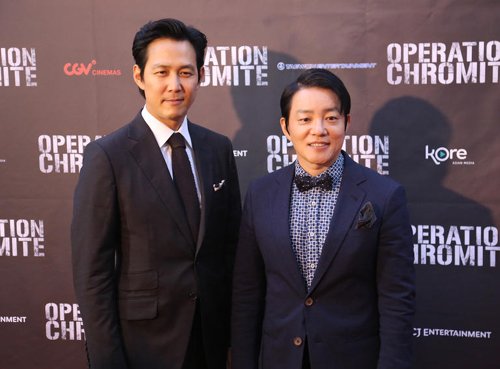 Lee Jung-jae (left) and Lee Beom-soo pose for a photo at the premiere of "Operation Chromite" in Los Angeles on Wednesday. /Yonhap

The Korean War film "Operation Chromite" premiered in Los Angeles on Wednesday ahead of its general release across the U.S. on Friday.

Leading actors Lee Jung-jae and Lee Beom-soo walked the red carpet, but Liam Neeson, who plays Gen. Douglas MacArthur in the film, was unable to attend as he is shooting a movie in the U.K.

Some 600 moviegoers and reporters were gathered to see them, who signed autographs and posed for selfies.

"Operation Chromite" will hit some 130 screens in the U.S., a record for a Korean film.