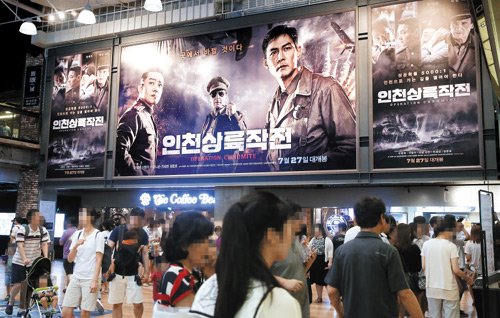 Posters for "Operation Chromite" at a multiplex in Samseong-dong, Seoul on Sunday

The clunky Korea-War movie "Operation Chromite" drew more than 2 million moviegoers in the first five days to soar to the top of the box office.

The film, which features Liam Neeson as Gen. Douglas MacArthur, ran ahead of "Train to Busan" and the latest installment of the Jason Bourne franchise.

Movie critics widely panned the film for its turgid plot and ham acting, but some 464,400 people flocked to the cinemas on the day of its opening. Ticket sales have remained strong while the gap with second-ranked "Train to Busan" has gradually widened.

The movie focuses on an intelligence operation code-named "X-Ray" that led to the historic Incheon Landing, which turned the tides against the invading North Korean forces which had cornered U.S. and South Korean troops at the early stage of the Korean War.

The movie focuses on a largely unsung naval intelligence unit and other soldiers and ends with a solemn dedication to the soldiers who died.

Moviegoers were pleased to learn about an unknown aspect of the famous amphibious landing. One viewer said the main draw was not Neeson, who has barely more than a walk-on part, but the unknown heroes of the operation.

Contrary to projections that the movie would appeal mainly to older audiences, viewers in their 20s account for more than 30 percent of the total.

Jang Byoung-soo (24), who saw the movie with his parents, said, "The only thing I knew about the Incheon Landing was that Gen. MacArthur turned the tides of the war, but I had no idea of the intelligence operation that went on behind the scenes".

Movies focusing on Korea's modern history generally do well even if they are often heavy-handed and awkwardly scripted.

"Northern Limit Line", about a naval clash between North and South Korea on the West Sea in 2002, drew 6 million viewers, while "Spirits' Homecoming", about Korean women forced into sexual slavery by Japan during World War II, attracted 3.85 million.

"Korean War Flick Takes Box Office by Storm"
by HanCinema is licensed under a Creative Commons Attribution-Share Alike 3.0 Unported License.
Based on a work from this source