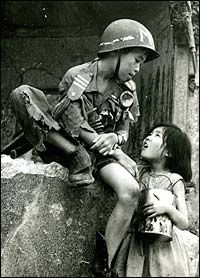 Cinematheque KOFA is hosting a showcase of films about the Korean War (1950-53) in time for the 60th anniversary of the conflict's outbreak on June 25.

A total of 17 works, from black-and-white 1950s films to modern action blockbusters, will be screened for free in the Sangam-dong theater in western Seoul through June 30.

A drama by Lee Kang-cheon, released in 1955 two years after the war came to an end, delves into the nature of human instincts and the destructive side of human desire when the two main characters, a North Korean partisan and North Korean soldier, are placed under extreme circumstances.

"Five Marines" (1961) by Kim Ki-deok (not to be confused with the younger Kim Ki-duk) is one of the first domestically produced war movies while Lee Man-hee-I's 1963 "Marines Are Gone" paved the way for big budget spectacles by reenacting realistic battle scenes and sweeping tickets in the box office. Kim's "North and South" (1965), a tragic melodrama about a family separated by the inter-Korean conflict, will also be shown.

Not to be missed is master director Shin Sang-ok's "The Red Muffler" (1964), which became a milestone in Korean cinema by featuring an airborne military jet and the film's namesake red scarf in color. A sequel to the movie, "R2B: Return to Base" is currently in pre-production and shooting is slated to begin in August.

Another notable film is "The DMZ - 1965" (1965) by Park Sang-ho, about two children, a little girl and boy, who struggle to survive after being orphaned near the 38th parallel. Particularly touching is a scene in which the boy hunts for frogs to feed the hungry girl. The work is often considered a semi-documentary since it was actually shot in the DMZ; it was the first time a movie was filmed there in 12 years since the armistice was signed in 1953. The Korean Film Archive has recently released the film on DVD which offers English subtitles (15,400 won).

Recent titles to be featured are the 2004 action blockbuster "Taegukgi" starring Jang Dong-gun and Won Bin and the 2005 hit tragicomedy "Welcome to Dongmakgol".
Admission is free of charge. For the screening schedule and more information, visit http://www.koreafilm.org
___________
A scene from "The DMZ - 1965"