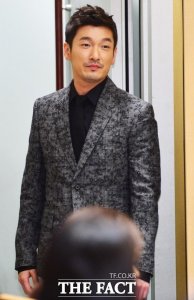 From musicals to movies, actor Jo Seung-woo proves he's got more than just that boyish charm.

Having just wrapped up filming his latest, "Marathon", a tired-but-happy looking Jo got us caught up at the movie's release.

"Marathon",a heartwarming film about a 20-year-old autistic young man with the mental capacity of a 5 year old, challenged Jo to make his performance as authentic as possible. He prepared mentally and physically for the role of Chowon, which entailed endless running scenes. He spent time with autistic men and women to understand their lives.

Jo debuted in 1999 with the movie, "Chunhyang. It wasn't an easy role to land, but he caught the eye of director Lim Kwon-taek. He has since played both tough guys and the more tender type - and of course, we can't forget his work in musicals.

Oh, and his nickname? Colleagues say he is called "old man", a title indicative of his maturity and considerate nature.