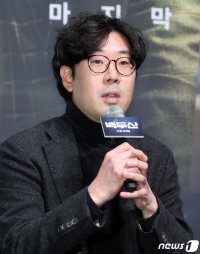 KIM Byeong-seo is a stylist who injects bright and lively images. His free style of filming unique characters under the natural light are more conspicuous in the more recent movies of his, such as "Season of Good Rain" (2009) and "Castaway on the Moon" (2008). Instead of using long takes that are the common aspect of [Heo Jin-ho] films, KIM used short cuts to enhance liveliness in "Season of Good Rain". In "Castaway on the Moon", he portrayed a man and a woman who communicate with each other by stepping out of their cocoons. These cinematographic approaches drew attention for injecting energy of change into the directors usual directing styles. He made his debut at a very early age of mid-20s and captured drama and emotion stably and heavily. After the rough-cut and yet energetic youth flick "The Aggressives" (2002), KIM has shown increasingly youthful scenes. This trend climaxed in "Go Go 70" (2008), a music film about a soul band of the 1970s. In particular, the scenes of musical performances that he filmed with nine other cinematographers such as [LEE Mo-gae], [JO Yong-gyu], and [KIM Jee-yong], with the feel of a real live performance deserve high merits in terms of the attempt and the degree of finish.