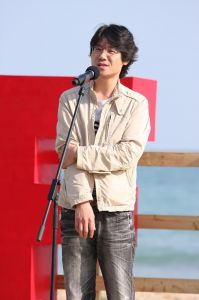 Born in 1974. Graduated from the Film Department at Seoul Institute of the Arts. With his short 81, Hae-jeok Became the Disco King, Kim won the Miraebol Award at the 25th Korean Indepentent Short Film Festival. Starting his professional career as a scripter to Bong Joon-hos "Barking Dogs Never Bite" (2000), he caught attention with his debut feature "Bet on My Disco" and received Critics Award at the Yubari International Fantastic Film Festival in Japan. He completed his second feature in seven years.