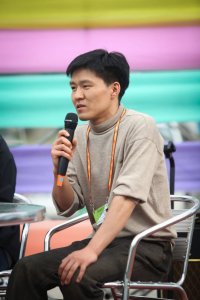 Born in 1975, Seoul. He Studied political diplomacy, then studied documentary at Korea National University of Arts. He directed documentaries such as The Gate of Truth which received the Grand Film Awards at the 30th Seoul Independent Film Festival and the Audience Critic Awards at the 6th Jeonju International Film Festival. The Painters View received Netpac Awards at Jeonju International Film Festival 2017. Filmography 2011 The Time of Lovelessness 2009 Spaces that Remember 2007 Not Guilty 2004 The Gate of Truth 2001 My father