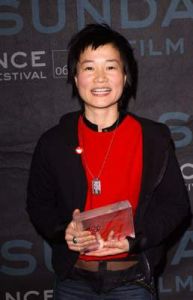 So Yong Kim is a filmmaker, musician, and artist who works in partnership with her husband Bradley Rust Gray.

So Yong Kim was born and raised in Pusan, Korea, then immigrated to the United States when she was twelve. She studied painting, performance, and video art and earned her MFA from The School of the Art Institute of Chicago. So Yong Kim is a recipient of the New York Foundations Video Artist Grant, Puffin Artist Grant, the MacDowell Colony Fellow for the National Endowment for the Arts, the Sleipnir Artist Travel Grant, and others. She has exhibited her installations and films/videos throughout the United States, Europe, and Japan. Her short film, A BUNNY RABBIT featured cinematography by Christopher Doyle.

Kim produced Bradley Rust Gray's first narrative feature, SALT, in 2003, which won four international awards and was released on the Sundance Channel. She is set to produce his second feature, JACK & DIANE, scheduled to shoot in the summer 2006.

Most recently, So Yong has completed her first feature, IN BETWEEN DAYS, which she wrote and directed. The film has been selected for Dramatic Competition at the 2006 Sundance Film Festival and has been invited to the 2006 Berlin Film Festivals International Forum for New Cinema. She is in development with her second feature, TREELESS MOUNTAIN, which was featured at the 2005 Pusan Promotion Plan and was selected for the 2006 Sundance Writers La