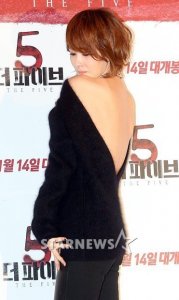 170cm, 50kg, Blood type A
Kim Sun-ah, the queen of comedy, has a new movie out and is currently one of the Korea cinema's top actresses.

In the flick, "She's on Duty", Kim Sun-ah's character, Chon Jae-in is a detective who goes undercover as a high school student. It's a departure from her usual roles. But her trademark comedy is still there. Although the movie is filled with what she does best, she says she was still nervous.

Kim's action in this movie was a focal point. Although it's not easy for a female actress to learn all these moves and work without a stunt double, Kim Sun-ah pulled off the moves with finesse. Needless to say she put an incredible amount of sweat and hard work into it.

Her debut on the silver screen was an action movie called "Yesterday".
Kim's cold image stuck her with a very haughty, cosmopolitan image - Until the movie "Wet Dreams". Kim Sun-ah made a complete transformation and gave off a very amiable and friendly air. But still, audiences weren't quick to warm to her.

She staked her claim as a comical actress in the movie "Great Expectations". Her improve on the set challenged even those of her senior in comedy, Lim Chang-jung. But Kim Seon-ah doesn't want to be pegged simply as a "silly" actress -

A careful, meticulous young woman hidden underneath an outgoing, free-wheeling public image. This has kept her afloat and popular during a time when the movie industry is overrun with male-centered films.
Whenever we meet up with her, she always manages to put a smile on our faces. We hope her laughter lingers with fans throughout her career - that was the beguiling actress, Kim Sun-ah!