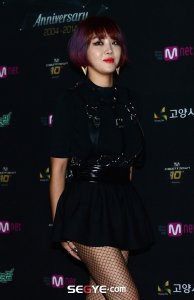 During 2009, her popularity began to increase after she started appearing on many entertainment programs, including Invincible Youth, on which she gained the nickname "Adult-dol" and Heroes. She became a DJ on Pump up the Volume on KBS Cool FM, from 8 PM until 10 PM, first appearing on April 19, 2010 but due to Brown Eyed Girls' overseas promotions Narsha decided to leave the show, with her last broadcast on Dec. 28, 2010. She made her debut as an MC through OnStyles fashion program, Style Show Fiㄹ on June 16, 2011.Narsha made her acting debut through MBC's drama series Lights and Shadows playing the role of Hye Bin, a singer aspirant.