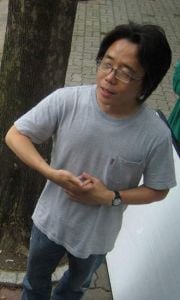 Born in Korea,1972. After graduating from the Film Department at Seoul Institute of the Arts, he studied abroad and graduated from Pratt Institute of the Arts. Currently he is completing Graduate School of Advanced Image Science, Multimedia and Film, Chung-Ang University. Enlightenment Film is his debut feature film.