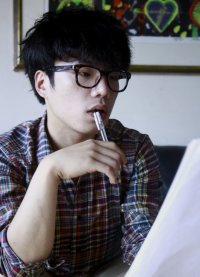 He started his carrier at a theatrical troupe Maroo as an actor, then become an active thertrical director for years. The first film that he participated in as actor was "Standing on the End of the Horizon" (2013.) "Recording" (2015) that he wrote himeself is his first directorial debut.