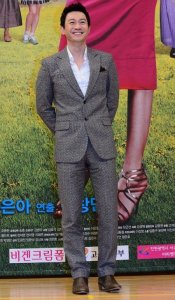 We uncovered a side to this actor we hadn't seen before~ These days not a week seems to go by when casting calls don't come pouring in... It's actor Park Yong-woo! His polished talent has managed to monopolize the love of audiences once again -

STAR FOCUS cameras caught up with Park Yong-woo right in time for the filming of his upcoming movie, . Park plays the part of a homicide detective, a character much different from his usual, more romantic and lighter roles. This time, there's a lot more action and a lot more "Mr. Tough Guy."

Park Yong-woo endured rigorous physical training for his part and rapidly dropped the weight to play the younger, lean cop. He also tanned his fair skin, giving himself a more rough image.

A lot of expectation is riding on the star, especially after his success as lead actor in last year's, .
The straightforward frankness and confidence of attracted flocks of the younger generation to theaters. The originality of the plot and well-structured composition helped set the stage for Park's acting finesse. This was his claim to fame, his release from "supporting roles."

Selected as one of the most highly anticipated actors of the year, Park Yong-woo! HIS secret lies in his unfaltering path through acting... Most would agree that his success - is well-deserved.