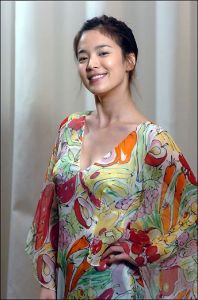 Song Hye-kyo is the wife of Song Joong-ki.

Recorded birthdate : 1982/02/26
Her fresh, flirtatious smile outshines most other stars - actress Song Hye-kyo! She finally takes her first step onto the silver screen, and today's Star Focus takes you to her first-ever movie premiere!!

Because this was her first movie, the media had swarmed the theater waiting anxiously to meet Song. As she stepped onto the stage, bulbs flashed wildly and the audience erupted in applause, welcoming Song Hye-kyo to her silver screen viewing.

Luckily for Song Hye-kyo, she had talented Cha Tae-hyeon as her co-star - An actor from the 2001 Asia-wide hit movie, "My Sassy Girl". The two leads, both the same age, boasted an excellent on-camera chemistry.
Everyone's been through the joy and heartache of their life's first love, and the film, "My Girl and I" portrays such an experience.

Despite their true ages, Song Hye-kyo and Cha Tae-hyeon were more than convincing in their portraits of the film's high-school characters.
They dug up past memories to perfect' the scene of their characters' first kiss. And it gave the kiss the per'fect effect!

Song Hye-kyo! The name itself is recognized in many Asian nations. Her role in the TV drama, "Autumn Fairytale", is well-remembered, as is her character in "Hotelier". She acted with the best of Korea's actors.

Although the TV dramas were viewed some time ago, the interest in them have not faltered.

With that in mind, here are some dramas that she must have REALLY liked, because their success was incredible!
The TV drama, "All In", starring Song with actor Lee Byung-hun. It was a hit, but the popularity did not compare to that of her next drama, "Full House" with singer and actor Rain. Song Hye-kyo became an idol.

No one would argue that Song Hye-kyo is an attractive actress, but the adoration from fans of all ages comes from the natural charm that she exudes. Whether it's on-screen or in person.

With the kind of popularity that Song enjoys, she has become a favorite to cast in ads and commercials for Korea's brand-name companies. She has the world of television under her spell and very soon, perhaps the silver screen, as well!

The film that everyone's can't wait for, "My Girl and I"! Already it's been quick to sell in the overseas market. If you're a fan of Song Hye-kyo, you won't want to miss it.