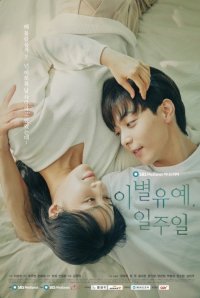 10 episodes
On SBS Medianet at 17:00 from 2021/02/22 (2 episodes per day)
Drama version of "Breakup Probation, A Week - Movie"
Synopsis
Ga-ram and Seon-jae who are about to get married, suddenly got into a car accident. The accident left Seon-jae in a coma, and for Ga-ram to lose her life. After leaving this world, Ga-ram finds herself in an unknown place where she receives a strange offer from a man named X.

Ill give you a week.
In order to save Seon-jae, break up with him in a week.

Ga-ram goes back to the week ago. She must say goodbye to Seon-jae who promised to be with her forever. Only then Ga-ram realized Seon-jaes sincerity which had been hidden to her. Seon-jae fights alone to protect his love, but its too late. They need to find excuse to break up but as time went, there were only reasons for them to now break up.