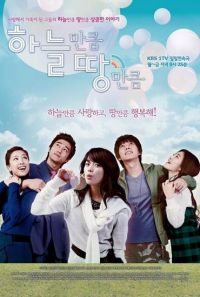 KBS Title : "High as the Sky, Wide as the Earth"

This drama searches the true meaning of a happy family by comparing two families: one of a low social and financial status whose members sincerely trust and care about one another despite their constant bickering, and an affluent one whose members have lost trust in one another yet try to save their family from disgrace and after many twists and turns make it reborn into a genuine family. This drama also attempts to tackle social issues facing todays families, such as a high divorce rate among young couples and the older generations involvement in raising grandchildren at the age when they should be enjoying their twilight years in peace and comfort. The primary goal of the drama is to find a broader meaning of family.

Park Hae-jin
Chung Moo-young: despite his upbeat personality, Moo-young faces obstacles in interacting with people due to his low social status. He cant open his heart to others because he is afraid of being hurt. Myung-tae always compares him with Sang-hyun, but when he is with Ji-soo, his cheerful and frank personality naturally reveals itself. He appears cynical and absentminded in everything he does, but once he makes up his mind, he does his utmost to achieve his goal. Unable to become a genuine member of his family, he gets himself into many troubles and hates himself for acting weirdly though he knows that Myung-ja and Tae-shik sincerely love him as their own son.


Lee Joo-hyeon
Kim Sang-hyun: Sang-hyun has gained recognition at work as an assistant to a famous fund manager and is waiting for the day when he will be able to launch his own fund. He is affectionate and outgoing and a good son of his parents. He works hard to help his family, which lives with his parents-in-law due to financial reasons. Despite his high self-esteem, he does his best to avoid conflicts. But once his self-esteem is hurt, he transforms into a coldhearted person who is not scared of anything. He tries to act reasonably to accept Moo-young, a total stranger to him, as his younger brother, but so far they have failed to open their hearts to each other.


Han Hyo-joo
Seok Ji-soo: While in college, Ji-soo had a part-time job in a movie promotion firm and upon graduation was scouted by Myung-jus firm. She knows that Myung-ju hired her out of compassion. Affectionate and prudent, she adores her father and prioritizes her familys happiness above everything else. She deals with her conflicts with Ji-woong and his wife in a wise way. Having been close with Myung-ju since childhood, Ji-soo recommends Myung-ju to her father as his new wife, because she wants her father to finally find happiness after living alone for over 20 years. She knows better than anyone else that this rascal Moo-young has an innocent heart and sincerely cares about him.


Kang Jeong-hwa
Yoon Eun-ju: An exact opposite of her mother, Eun-ju has no interest whatsoever in chores and feels compassionate toward her mother, who is perfectly masking her true feelings. She was a good student in college and has gained recognition at work. She is aware of her parents problems but doesnt show that. She is not good at expressing her affection toward her family members, probably because she was raised by parents who try to look as a happy couple on the outside but are completely indifferent to each other on the inside. She is not close with her sister, Eun-ha, either. But she is honest and proactive when it comes to love. She despises boastful guys and she is fastidious to the extent that she cant have more than three dates with the same guy. She knew Sang-hyun was her destiny when she had a fourth date with him. She is all sweet and charming when she is with him. She believes that she will marry Sang-hyun because she loves him and that her husband and mother-in-law will help her with household chores after she gets married.

By Land and Sky | Cast

By Land and Sky | News

By Land and Sky | Shopping

By Land and Sky | Pictures

View all 77 pictures for "By Land and Sky"

By Land and Sky | Links | Suggest a link

By Land and Sky | Reviews

By Land and Sky | Facts

By Land and Sky | Community