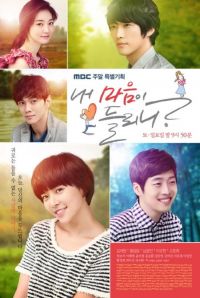 30 episodes - Sat, Sun 21:50
Synopsis
This coming-of-age story of three young people and their love triangle will warm the hearts of viewers.

Cha Dong-joo | Actor Kim Jae-won
He is confrontational, cold and dismissive of others. He lost his hearing in an accident when he was little. Since his hearing disability could undermine his position as the heir to the family fortune, he painstakingly learned to cope with his disability and appear as if he has normal hearing.

Bong Woo-ri | Actress Hwang Jung-eum
At the age of 25, she cares for her stepfather who has the intelligence of a 7-year-old. When she was a child, her mother was killed because of a factory incident and her stepbrother went missing afterwards. One day, she meets a young man who has a striking resemblance to her missing stepbrother.

Jang Joon-ha (Ma-roo) | Actor Namgoong Min
Despite his excellent grades, he was teased mercilessly by the kids because his father was mentally retarded while his stepmother was deaf. When Mrs. Tae Hyeon-sook tells him to come to her if he ever needs anything, he takes up her offer. He also meets her son, Dong-joo, who confides his disability to him. Ma-roo leaves Korea together with Dong-joo and also changes his name to Jang Joon-ha.

Kang Min-soo | Actress Go Joon-hee
Smarter than most girls, she wears fashionable clothes, and is meticulous about her looks. She is approached by Joon-ha to invest in his new cosmetics company. She gets to know Joon-ha and Dong-joo, and detects that they share a secret, which she intends to find out.

Lee Seung-chul | Actor Lee Kyu-han
His parents raised chickens on a farm. He grew up in the same neighborhood as Bong Woo-ri since they were kids and watched her grow into an attractive young lady. Despite knowing that his parents would be horrified about his intentions to marry Bong Woo-ri, he decides to win her heart first. But all of a sudden, some very eligible bachelors with respectable jobs appear out of nowhere and start wooing Woo-ri.

Can You Hear my Heart | Cast

Can You Hear my Heart | News

Can You Hear my Heart | Shopping

Can You Hear my Heart | Soundtracks, OST (Sponsored)

Can You Hear my Heart | Pictures

View all 575 pictures for "Can You Hear my Heart"

Can You Hear my Heart | Videos | Suggest a video

Can You Hear my Heart | Links | Suggest a link

Can You Hear my Heart | Reviews

Can You Hear my Heart | Facts

Can You Hear my Heart | Community

Can You Hear my Heart (내 마음이 들리니)