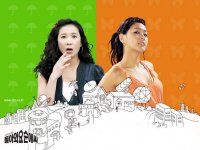 Soon-ae (Shim Hye-jin), a 40-something lady in her 10th year of marriage, suddenly finds Cho-eun (Park Jin-hee), a pretty stewardess in her 20's, stride into her life to announce that "I am going out with your husband, Captain Yoon Il-seok (Yoon Da-hoon)." Cho-eun shamelessly asks Soon-ae to get a divorce and give up her husband.

Shocked with disbelief, Soon-ae climbs into Cho-eun's car, saying that she must confirm what she has heard with Il-seok first. Although Soon-ae tries her best to stay composed and keep a straight face, she feels her blood boil when Cho-eun taunts her by saying that there's no point in staying in a marriage without love or affection. When Il-seok calls Cho-eun and says, "Honey, where are you?" Soon-ae loses it and grabs for Cho-eun's hair. The two women go on pulling on each other's hair and crash the car. They are moved to a hospital where their souls become switched around...

View all 82 pictures for "Come Back, Soon Ae"