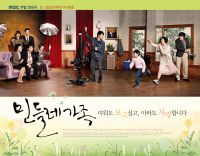 50 episodes - Sat., Sun. 19:55
Also known as "Blossom Sisters"
Synopsis
Sometimes family members can't stand each other but their family bonds bring them back together!

On the surface, most families appear to be normal but every family has a secret or two.
Perhaps you could say that a real family is a bit dysfunctional with family members harboring grudges against each other or despising one another with conflicting feelings of love and hate.
There are matters that families do not wish to reveal to other people and some internal issues that nobody within the family wants to bring out into the open.
The pain that family members inflict on each other and the unspeakable actions that cause embarrassment are all part of family life.
But families eventually come together during a crisis and offer each other comfort.
This story is about adults who have marital problems but still love each other deeply.
In addition, the drama shows the complicated relationships between parents and their children.

Park Sang-gil (Father, actor Yoo Dong-geun)
He's an executive at a construction firm. Born as the eldest son, he's a hardworking man who is dedicated to providing for his family. He spent most of his career overseeing infrastructure projects that laid the foundation for the economic growth of the nation and he's immensely proud of this. When he retires, the underlying problems at home begin to surface. Just when he thinks that he lived life to the fullest, he becomes embroiled in a crisis at home.

Kim Sook-gyeong (Mother, actress Yang Mi-kyeong)
After marrying Sang-gil she dedicated her life to her husband and three daughters. She is cultured and some people think she's a shallow housewife. She laments the fact that she did not bear a son but her husband doesn't care much about it and berates her when she brings it up. He tells her that she should enjoy her life now that the kids are all married. Just when she thinks that she can settle down into a comfortable life with her retired husband, her daughters create problems for her. As she becomes disappointed with her daughters, a bigger crisis looms over her.

Ji-won (Eldest daughter, actress Song Seon-mi)
She was a straight-A student in school and was popular for her looks and nice personality. She always made her mother proud. After graduating from an elite women?s college, she married a man from a respectable family. She has it all and people envy her life. Yet, she is not happy with her marriage. Her husband is a perfectionist and this causes a strain in their marriage. But she doesn't want to get a divorce because it would devastate her parents. Will she be able to endure living in an unhappy marriage?

Mi-won (Second daughter, actress Maya)
As the middle child, she was always at odds with her mother. She wasn't as pretty or smart as her older sister, causing her to develop an inferiority complex. On top of that, her mother lavished more attention on her sisters than on her. After failing two times to get into college, she finally gets admitted to a college of her second choice on her third try. She gets pregnant by her college boyfriend and she moves in with him against her parent's wishes. She struggles to raise her baby with her young husband.

Hye-won (Youngest daughter, actress Lee Yoon-ji)
She's the youngest daughter and works in the purchasing division of a department store. She's a bit tomboyish but she can act like a foxy lady when she wants to. She's a workaholic and looks down on most men. It seems that she'll be single or remain unmarried for the rest of her life. But at her mother's urging, she goes on blind dates with men and rumors spread about her romantic relationships to her chagrin. One day, Jae-ha, whom she met on one of her blind dates, proposes marriage.

Min Myeong-seok (Ji-won's husband, actor Jeong Chan)
He's Ji-won's husband and his mother-in-law adores him. He's a successful dentist. Everybody looks up to him as a model husband. He's also an advocate of women's rights. However, his marriage is fraught with problems and contradictions as he's a control freak and perfectionist. Ji-won appears to have the perfect marriage but she is at her wit's end on what to do about her marriage.

Kim Noh-shik (Mi-won's husband, actor Jeng Woo)
Life is short! That's the mantra that Mi-won's husband lives by. During a university spring festival, he gets Mi-won pregnant and then elopes with her. So Mi-won's mother openly disdains him but he never gets angry over the way she treats him. Unable to find a salaried job, he jumps from one part-time job to another until Mi-won's father pulls some strings to get him a job at a small company.

Jae-ha (Son, actor Kim Dong-wuk)
He thinks that the institution of marriage is outdated and old-fashioned. He runs a photo studio and mostly works on shooting photos for print ads. He likes work more than women and finds it appealing to live as a bachelor without any obligations. When his freelance work tapers off, he seeks financial help from his father who attaches conditions to his assistance. If he gets married, his father is willing to give him his inheritance immediately. However, if he refuses to get married, then not only will his dad leave him out of his will but he'll also repossess the photo studio. Jae-ha becomes frantic. Just then, he meets Hye-won on a blind date and decides to marry her.

Episode 1
Hye-won is helping preparing food for the Lunar New Year holidays at her family home. Mi-won, the middle daughter in the family, unexpectedly shows up and gets enraged when her mother gives Ji-won, her older sister, special attention like she always did. Mi-won also takes issue with the customary gift of dumplings that her mother gives to her dads boss every year
Mi-won tells her mom to quit making dumplings for the company boss, which deeply upsets her. So her mom throws a bag of flour at Mi-won to show her utter displeasure with her insolence.

Episode 2
Hyo-dong tells his son, Jae-ha to find a girl to marry within two weeks, giving Jae-ha an impossible task to pull off. So he bumps into Hye-won one day and asks her if she has any friends whod be willing to get married in two weeks.
Meanwhile, Sook-gyeongs friend Pil-nam tells her that the dumplings that shes been giving to her husbands boss might not be enough to secure a promotion for her husband...

Episode 3
On the day of Sang-gils birthday, he takes his entire family out to a fine restaurant to celebrate. After dinner, his daughters give him birthday gifts. Mi-won hesitates about giving the cheap shirt she bought as a birthday gift for her dad when she sees her other sisters bought expensive birthday gifts. Just then, Noh-shik gives her dad an envelope containing $1000 in cash and tells him to spend it on a trip to Mt. Seorak.
A little while later, Sook-gyeong catches up with Noh-shik when he excuses himself to use the restroom and returns the $1000 that he gave to her husband. She then berates him for being a poor provider to his family, giving her daughter a hard life. But Mi-won overhears her mom yelling at her husband and gets into a huge fight with her.

Episode 4
A scandalous rumor starts to spread about Hye-wons relationship with a company vice president. When Sook-gyeong hears about the rumor, she scolds Hye-won.
Meanwhile, Jae-ha is delighted that his father promised to give him his inheritance early if he gets married within weeks. So Jae-ha approaches Hye-won and begs her to marry him...

Episode 5
Noh-shik goes to the dentist clinic owned by his brother-in-law, Myeong-seok. But he also meets his mother-in-law Sook-gyeong there. Thus, he is unable to ask Myeong-seok for a loan in front of Sook-gyeong. As he is about to leave, Sook-gyeong asks him if he gets paid on time by his company. He lies that everything is well.
In the meantime, Sang-gil pays Noh-shik a visit and hands him $20,000 to move to a nicer apartment. Noh-shik gets teary-eyed and promises to repay him after he becomes successful.

View all 89 pictures for "Dandelion Family"