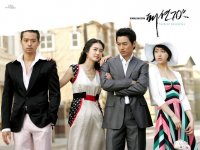 Love and ambition of four young and restless souls who are intertwined by destiny. The story revolves around the lives of a talented fashion designer in the 1970's played by Lee Yo-won and a fashion designer, played by Kim Min-jung, who lacks talent but makes up for it through hard work.

The two fashion designers become rivals on their way to success. The drama also focuses on the complicated love life of the characters. Dumi (Lee Yo-won) was born from a wealthy family but she loses both her parents during the Korean War and soon after she is sent to Austria where she spends most of her childhood.

On the other hand, Koh Ju-hee's (Kim Min-jung) family is poor but she begins to develop a keen sense of fashion after she is adopted by a rich family. Like Mozart and Salieri, Dumi and Koh Ju-hee develop a similar rivalry and compete against each other for love and success... A tough teacher with an attitude and her cute student have an exciting time at school. Bori was a legend in high school for being a troublemaker and getting into fights.

Then one day she gets expelled from school for being involved in a fight. After overcoming numerous hardships, she gets a job as a ubstitute teacher at her old high school. She is excited with the fact that she will be able to meet her old teacher, Ji Hyeon-woo, whom she has had a crush on for years. But a troublemaker in her class, Tae-in, keeps getting her into trouble. Tae-in is a smart and an athletic student. From Tae-ins point of view, he dislikes Bo-ri because she isnt smart but at the same time, has a headstrong personality. As his relationship with his teacher turns for the worst, he gradually