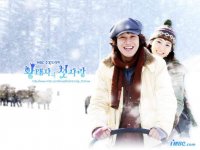 There's the first royal prince, the son of a millionaire who knows nothing but money and thinks the world revolves around him. The second royal prince is Mr. Perfect who only cares and goes after his success and accomplishment. And between these two comes along a penniless girl who's nothing much of a kind but only full of faults except that she has a huge jolly heart and passion for life. Set in the world-renowned beautiful places and resorts, "First Love of a Royal Prince" takes a look at these three young people's story of finding their dream, true happiness as well as their true love. Numbers of exotic places like the stunning blue sea of South Pacific and the ever so white snow field of Sapporo(Japan) will spread before your very eyes.

View all 52 pictures for "First Love of a Royal Prince"

First Love of a Royal Prince | Links | Suggest a link