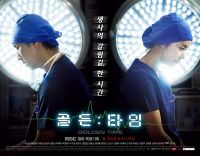 23 episodes - Mon, Tue 21:55
Synopsis
It takes courage to believe in yourself as a first-year intern giving emergency treatment to a critically ill patient in ER without the guidance of an experienced doctor. This TV miniseries takes place in a hospital where doctors work hard to save lives despite the insurmountable odds that they face. And it centers around one man who is fighting a lone war to save patients lives amidst a rigid hospital system and society ridden with injustices.

Lee Min-woo (Actor: Lee Seon-gyoon)
After graduating from medical school, he skipped the specialist certification exam and took a hiatus from the medical profession. He then took a temporary teaching job at the best Oriental medicine hospital in the country and during his second year there he was unable to save the life of a critically injured patient due to his lack of experience. After this incident, he realized the folly of spending two years as an instructor and asks himself why he chose a career to become a doctor. To seek answers, he returns to a regular hospital to complete his unfinished internship.

Kang Jane (Actress: Hwang Jeong-eum)
IThe heiress of the Sejung Foundation chairman who owns five hospitals and founded one medical school. She chose to become a doctor because healing people comes natural to her. It was not her character to depend on her rich father for money all her life. And being a doctor also makes her financially secure in the case she marries and gets divorced. She merely wants to live an ordinary and fulfilling life. But she does not like working inside a rigid system and abhors the thought of lording over others in the system.

Choi In-hyuk (Actor: Lee Sung-min)
He is one of the few doctors in the country who will take the risk of accepting critically injured patients in ER and perform surgery. He will work at the hospital for three to four days without any sleep to the detriment of his health and still decide to return to the ER when he gets paged for an emergency. He has a sharp eye, being able to tell if someone has lost or gained one or two kilograms. And after getting to know doctors from different specialties, he developed a knack for matching personality types with specific medical fields, guiding young interns to a medical specialty that will best suit them.

Shin Eun-ah (Actress: Song Seon-mi)
Without her indefatigable energy and excellent organizational skills, the surgery department would have no way of operating efficiently. She handles all the surgery schedules at the hospital under Choi In-hyuks direction and arranges the transport of patients. She has eight years of experience in ER and has worked together with Choi In-hyuk for two years. She also has a suitor and has plans to leave for Canada soon. But despite this, she is constantly consumed with her work at the surgery department.

View all 302 pictures for "Golden Time"