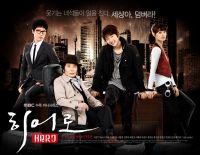 Working as a reporter for a racy tabloid called the Monday Seoul, Do-hyuk uses any means necessary to get a scoop.
One day, he goes to interview Yong-deok, the boss of the Axe gang, who suggests that they start their own newspaper.
Do-hyuk lies about the credentials of his former co-workers when he introduces them to Yong-deok as potential hires for the newspaper venture.
With his former co-workers on board, he is able to launch the Yongdeok Daily together with Yong-deok. But the newly hired reporters soon find themselves sucked into a huge conspiracy that could utterly ruin their lives.

Jin Do-hyuk (actor Lee Joon-ki)
Former reporter for a racy tabloid. Both of his parents died in a hit-and-run accident when he was a child and so he grew up with his sister. He had a tough childhood but got through his hardships with a bright personality and a positive outlook on life. Wishing to become a respectable journalist like his dad, he tries to become a reporter for a big daily but due to his poor educational background, he ends up working for a tabloid called the Monday Seoul. He uses every trick in the book such as wiretapping, surveillance, and fake disguises to get a story.

Joo Jae-in (actress Yoon Soy)
She?s a detective assigned to the Homicides Unit. She is as tough as nails after mastering different kinds of martial arts but she?s also a bit shy around men. Though she is attracted to reporter Hae-seong of The Daesae Times, she also feels that it?s her duty to keep Jin Do-hyuk, a so-called journalist, from getting into trouble.


Cho Yong-deok (actor Baek Yoon-sik)
After serving 15 years in prison, he returns to his former life as a gangster boss. His Axe gang was once the most feared crime syndicate in the country. Upon his release from prison, he goes to see Chairman Choi Il-doo of the Daesae Group, which owns the Daesae Times, and causes a big commotion. He becomes partners with Do-hyuk to publish a daily newspaper that will change the world.

Kang Hae-seong (actor Eom gi-joon)
He?s a Daesae Times journalist and the most trusted employee of Chairman Choi Il-doo. He also dates the chairman?s daughter, Ho-gyeong. His life is set as the chairman approves of him as his future son-in-law. He has a mean streak where he will get rid of anyone who gets in his way. He later becomes jealous when detective Joo Jae-in becomes close friends with Do-hyuk.