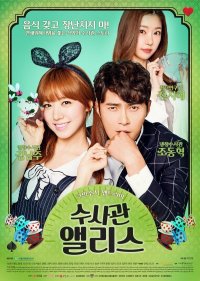 8 episodes - Mon, Tue, Thu, Fri 11:00
Also known as "Detective Alice"
Synopsis
Those of you, health threatening criminals playing tricks with food, put your hands up!
This crime comedy tells a story of the crime-busting efforts by the fabulous investigators pair, Cheon Yeong-joo and Jeong Re-oh.

View all 9 pictures for "Investigator Alice"