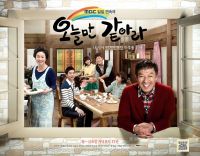 120 episodes - Mon~Fri 20:15
Also known as "The Best Day In My Life"
Synopsis
A story of our fathers generations life and love, who does not hesitate to make sacrifices for their children. People who do their best under any trying circumstances are usually content with their lives. And those who are happy with their current lives can be said to have lived very well. At their happiest moment, people would say Let everyday be like this! This drama will make the viewers find little happiness today.

Jang Chun-bok (Actor Kim Kab-soo)
55 years old. He only finished middle school and currently owns a gas station. He is treated as a VIP at banks because he is cash-rich and owns some prime real estate as well. Among his old school buddies he is the most successful businessman. Although he was a mediocre student, he had a knack for making money. He treats most people with little respect and indifferently but is a caring husband and father.

Yoon In-sook (Actress Kim Mi-sook)
54 years old. Chun-boks wife and mother of Ji-wan and Ji-soo. She was the eldest daughter of a school teacher in the countryside. Disappointing her mother who wished her to become a proper lady with reserved manners, In-sook was free-spirited and outgoing young girl. She was also the most popular girl in her school. She was pregnant with Jae-hos baby, but when he suddenly died, she married Chun-bok who was one of her suitors. After marriage, though she no longer has a bubbly and outgoing personality, In-sook still caries herself with confidence.

Jang Hae-jun (Actor Kim Seung-soo)
He is Chun-boks half-brother. Although he is cold, abrasive and reserved, he is honest and down-to-earth around Chun-bok. Due to the age difference between them, Hae-jun looks up to Chun-bok as a father figure. He is nice to his nephew and niece and has a good relationship with his sister-in-law, In-sook.

Jang Ji-wan (Actor Lee Jae-yoon-I)
30 years old. Son of Chun-bok and In-sook. He works for a large chaebol company. With his good looks and charming personality, hes also a good conversationalist. He has a close relationship with his mother and father to the point that he is like their friends. He is also aware that his father loves him dearly. And this is a slight burden in his life. But he can also act like a fussy son at times. He wishes to marry Hee-joo whose father is Sang-yeob, a family friend. But both of his parents strongly disapprove.

Moon Hee-joo (Actress Park Si-eun)
27 years old. She is the eldest daughter of Sang-yeob and Jae-gyeong. She works at a department store in the PR division. Like her mother, she is a penny-pincher and very discriminate about what she likes and dislikes. She never doubted Ji-wans love for her. Wanting to marry Ji-wan, both her parents and Ji-wans parents meet to discuss their marriage but the adults adamantly disapprove of them from getting married. She didnt expect this at all and finds it confusing. After Ji-wan assures her that he will persuade his parents to come around and approve of their marriage, he suddenly changes his mind and avoids her...

Kim Mi-ho (Actress Han Groo)
25 years old and friends with Hyo-jin. She is currently studying to be a civil servant. Even in desperate situations, she looks at the positives in life. Through her friend Hyo-jin, she gets to know Ji-wan. And with his help, she gets a job at Ji-wans dads gas station. She also rooms at his family house. As she gets to know Ji-wans family, she gradually becomes closer to them like a daughter. This fills the hole in her heart. But as she develops feelings for Ji-wan, she despairs that she is not good enough to ever be with him...