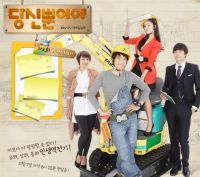 Also known as "My One and Only"
Mon~Fri 20:25
Synopsis
A ugly duckling in a disrupted family becomes a powerful swan and rises to the sky.

This is the story of a high school graduate who belongs to the so-called "88 thousand won-generation" who build successful momentum in his life.

We are living in a period of a nosediving birth rate, soaring suicide rate and happiness index at the bottom, which make us sigh with despair and grief.

The younger generations are losing their hope and ambition and going so far as to lose zest in life. If nothing changes, "unhappiness" might be the icon of the Republic of Korea. Our protagonist Gi Wun-chan takes the lead to distribute a happiness "virus" across the nation in the crisis.

In this program, Gi, a ugly duckling who has only his healthy body and sound spirit, struggles to reconcilate with family members and runs to realize his dream with dogged perverance. He will prove love is stronger than blood and physical efforts are more powerful than background.

Let's be absorbed in a story featuring his struggles, full of vicissitudes, which are aimed at showing life is worth living as our sweat and effort pay off regardless of money, educational background and family background.

This program was planned to search for happiness for the Republic of Korea through overcoming conflict between generations and classes. It tells us reconcilation through careful concern and cooperation is the only solution for preventing misfortune to be aroused by family nuclearization, the widening gap between the rich and the poor, and materialism.

A young housewife offended a grandmother when she touched her child and a grandfather was insulted by teenagers whom he advised to quit smoking in a public place. The latest accidents show the seriousness of the communication gap between generations in our society. Extreme egoism that neglects public order and rules of etiquette is prevalent in society.

The beaten parents might be my parents and the beating youth might be my children. In contemporary society, where the "sense of us" has disappeared in the midst of the extreme low birth rate and warlike educational background, finding a method for solving rifts between generations and classes is the most urgently-needed task.

This drama features conflicts between members within a family and confrontations between the common people and the privileged and proposes kind consideration, cooperation and conciliation, which are virtues of a great family, as a key to abolish conflicts in our society.

Family is the most beautiful present in the world and the hightest blessing in one's life.

Family is an aggregation of conflicts and harmony crystals. Parental love is the center of the family.

The success of a family drama depends upon how vividly conflicts within a family are expressed. In this drama, bad relations between the family of Gi Wun-chan and Na Mu-gunghwa serves as the pivotal plot. Stories involving the two families and in-laws, including rift between in-laws, mother-in-law and daughter-in-law, son-in-law and mother-in-law, sister-in-law and the wife of one'e brother, the elder son and younger sons and conflict between sisters (working mom and gold miss) are being described vividly.

This drama gives us an opportunity for considering a desirable family model in this rapidly changing period as well as conflict between maternity of different generations and the changing of maternity and the role of paternity.

View all 65 pictures for "Just You"

Just You | Videos | Suggest a video

Just You | Links | Suggest a link